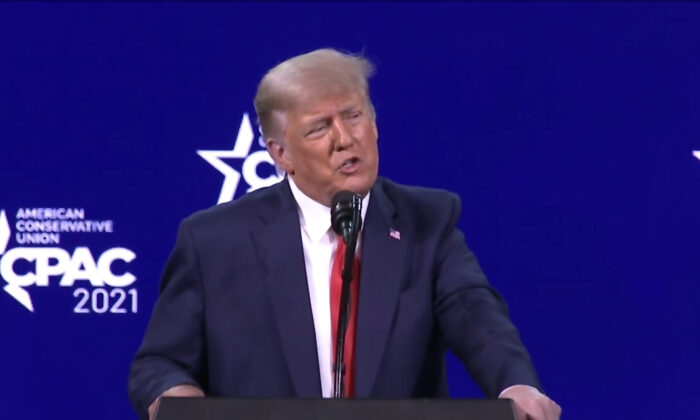 Right Side Broadcasting Network (RSBN) said it has been suspended by YouTube for two weeks because it broadcast former President Donald Trump’s Feb. 28 speech.

The media outlet wrote that YouTube claimed the video “violated their guidelines on election misinformation.”

“The video was approaching 4 million views. They have also removed it from their platform,” RSBN wrote on Twitter.

Trump delivered a speech to the Conservative Political Action Conference (CPAC) on Feb. 28, during which he briefly touched on the Nov. 3 election.

RSBN wrote on Twitter on Feb. 28 that “we try to play by the rules, but we will not censor President Trump.”

“We’re not going to remove or edit this video. Just so we’re all clear- if it gets removed, we didn’t do it,” the broadcaster said.

A search of YouTube suggests that other live streams of Trump’s speech were also taken down. The Epoch Times has reached out to the Google-owned video hosting platform for comment.

Earlier this week, YouTube suspended the channel of former New York City Mayor Rudy Giuliani for a second time because Giuliani allegedly violated the platform’s policies in nicotine use and the election, most likely in reference to his promotion of cigars during his videos.

About a week ago, YouTube also removed a Newsmax video that included an interview with Trump, and around the same time, removed a video of an attorney testifying to the Ohio legislature, claiming it included COVID-19 misinformation.

The Epoch Times itself was demonetized by YouTube in late January without prior warning or a specific reason outlining why.

“The founders of The Epoch Times are Chinese Americans who fled communist China and embraced their First Amendment rights here in the United States to create an independent and uncensored news organization. We believe that freedom of speech is the cornerstone of a free society and key for our republic to flourish,” The Epoch Times said in a statement in late January.

The move against RSBN—which broadcast most of Trump’s rallies during his 2016 campaign and while he was president—is certain to trigger even more criticism of Big Tech’s censorship of dissenting viewpoints.

Trump himself offered a warning about the potentially unchecked power of Google, Facebook, Twitter, Amazon, and others in his speech, saying they should face punishment if they silence conservative voices.

“All of the election integrity measures in the world will mean nothing if we don’t have free speech,” Trump said. “If Republicans can be censored for speaking the truth and calling out corruption, we will not have democracy and we will only have left-wing tyranny.”