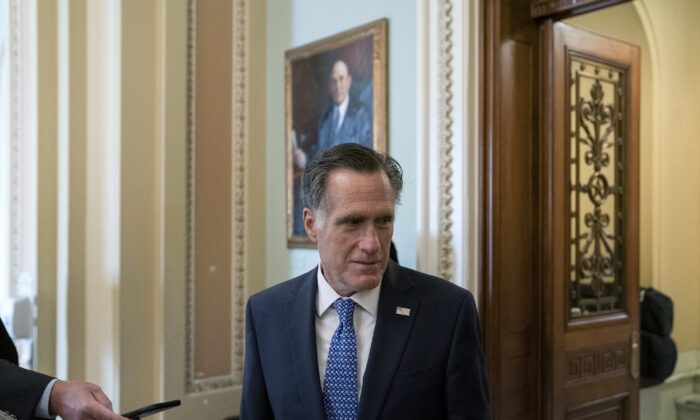 Ginsburg died at age 87 on Friday.

“The Constitution gives the President the power to nominate and the Senate the authority to provide advice and consent on Supreme Court nominees,” Romney said in a statement.

“I intend to follow the Constitution and precedent in considering the President’s nominee. If the nominee reaches the Senate floor, I intend to vote based upon their qualifications.”

The historical precedent of election-year nominations shows the Senate generally doesn’t confirm an opposing party’s nominee but does confirm a nominee from a president of its own party, Romney added.

Romney, the only Republican to vote against Trump during the impeachment saga, was considered a potential swing vote that some believed would join Sens. Susan Collins (R-Maine) and Lisa Murkowski (R-Alaska) in opposing a move to fill the Supreme Court vacancy before the Nov. 3 election.

But other possible swing votes, including Sens. Chuck Grassley (R-Iowa) and Cory Gardner (R-Colo.), on Sunday or Monday announced their backing of the move, leaving Republicans with enough votes and Romney’s position as potentially irrelevant.

Republicans hold a 53-47 majority in the Senate and Vice President Mike Pence can break ties.

No Democrats have signaled their intention to back Trump’s nominee.

Sen. Joe Manchin (D-W.Va.) was the only Democrat to vote for Brett Kavanaugh, Trump’s 2018 nominee to the Supreme Court.

Manchin said Monday he opposed the Senate voting on Ginsburg’s replacement before the election.

Democrats want the body to hold off until after the election.

Republicans argue there’s plenty of time and voters decided to keep the Senate in their hands in the 2018 midterms when they gained two seats.

That edge is proving crucial so far, as the opposition by Collins and Murkowski could have doomed Trump’s nominee.

Trump plans on announcing a female candidate to replace Ginsburg on Saturday.

West Virginia’s other Senator, Republican Shelley Moore Capito, said Tuesday that Trump and the Senate should act to fill the vacancy.

“The Constitution authorizes the president to name a nominee, and it gives the Senate the power to approve or disapprove of that nomination,” she said. “West Virginians and the American people expect us to exercise that responsibility.”

Romney had issued a statement about Ginsburg’s passing over the weekend with no mention of his position on Trump’s nominee.

But Liz Johnson, a Romney spokeswoman, forcefully rejected a tweet from a former lawmaker that claimed he spoke to a source who said Romney committed to not confirming a nominee until after inauguration day.

“Unless your name is Mitt Romney or you’re his spokesperson, you do not speak for Mitt Romney,” she added.

The senator in the statement praised Ginsburg, saying she “served our nation with a deep reverence for the law and our Constitution.”

“Her fight for women’s equality inspired all women to pursue their dreams without limits, and her grit, character and sharp wit made her an iconic and inspirational jurist beloved by people young and old,” he added.

“The beautiful friendship she shared with the late Justice [Antonin] Scalia serves as a reminder to all Americans to treat each other with kindness and respect, despite our differences. Justice Ginsburg’s record of distinguished service leaves an indelible mark on our country that will endure for generations to come. She and her husband Martin shared a full life together, and Ann and I pray tonight that her family finds comfort during this time.”