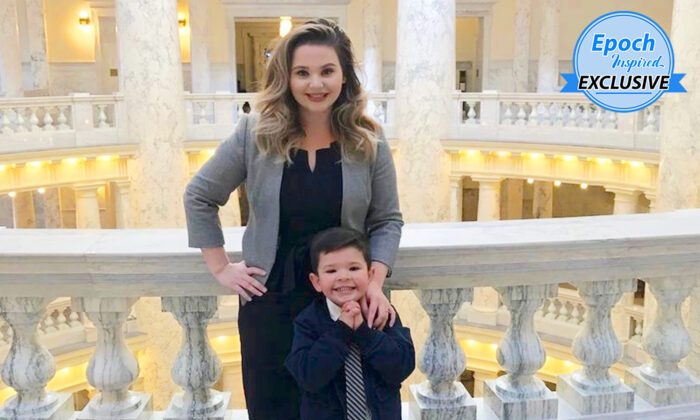 Rebekah Hagan with her 7-year-old son, Zechariah. She saved his life with the help of the abortion pill reversal treatment. (Courtesy of Rebekah Hagan)

A California teen mom who reversed her abortion over 7 years ago is now on a mission to guide expectant parents on their journeys and help them choose life.

Back in 2013, Rebekah Hagan, then a college freshman at Sacramento State University, was a newly single mom to a 10-month-old baby boy and was expecting her second child. Having just escaped an abusive relationship, she found herself at a crossroads. The seemingly hopeless situation led her to believe her life was falling apart, and she decided to abort the baby.

Speaking to The Epoch Times, Rebekah shared how faith in God, sincere repentance, and a wish to save her baby helped her make the right choice before it was too late. Rebekha now works for Heartbeat International, a pro-life pregnancy center with a mission “to make abortion unwanted today and unthinkable for future generations.”

She has testified before state legislators of Idaho in March 2017, Nebraska in Spring 2019, and Oklahoma in January 2020 regarding the abortion pill reversal informed consent bills. She has also testified against California’s Senate Bill-24, which required all the state colleges to “administer chemical abortion pills in health centers on campus.”

Rebekah, who had given birth to her first baby at the age of 17, said her parents had warned her “not to ever get pregnant under their roof again.”

“I knew I’d be in this completely alone,” she said. “Fearing I’d lose everyone and everything in my life, abortion looked like a hopeful, compassionate choice to spare my family further shame and embarrassment and to spare my first child any more suffering.”

She scheduled an appointment with a Planned Parenthood clinic and initiated a chemical abortion. However, she soon regretted her decision.

“I experienced the lowest, darkest point of my entire life after starting my abortion and taking the first abortion pill,” she said.

“I walked out of that Planned Parenthood clinic feeling completely deceived. Grief, guilt, and regret kicked in within a few minutes and as I sat in the parking lot. I kept asking myself, ‘What did I just do? I don’t even believe in abortion!’”

Rebekah says that, sometimes, fear compels us to do “irrational things,” and that was one of those times in her life. At the time, abortion seemed like a “good, responsible choice,” but for Rebekah, it didn’t take long for the true reality to sink in.

“After I began the process and swallowed the first abortion pill, I realized that was all a lie and that abortion can never be good—not for the baby and not for the mother.”

It was only after having left the abortion clinic, Rebekah shared, that she realized all the blame, guilt, and grief fell on her.

“Young women are sent to their homes, dorm rooms, or friend’s houses to complete the abortion process, thus making their bedrooms and bathrooms places of trauma.

“I was not emotionally or physically prepared to send myself into labor at home, over the toilet, and with no medical supervision.”

Rebekah says that her faith in God played a major role in reversing the abortion.

“I certainly was not living out my faith. All I could do was cry out to God and ask Him for forgiveness and a way out of my mistake,” Rebekah said.

She began the abortion pill reversal treatment using progesterone and continued her pregnancy. She “prayed and thanked” God every day, she said. Planned Parenthood expected her to return for a checkup to confirm the abortion was successful, and so they began calling her.

Rebekah eventually got the “courage” to call them back and explain that she was reversing the abortion. The staff discouraged the process with a warning.

“The clinic worker said, ‘Do you have any idea what you’re doing? Because of the abortion drug you already took, you likely won’t carry to term, and if you do, your baby could very well have severe fetal anomalies,’” she recalled. “It was an awkward phone call to say the least, and their words remained with me throughout my pregnancy.”

Despite the warning, Rebekah’s pregnancy ended well, and she gave birth to a healthy baby boy, proving the prediction made by Planned Parenthood wrong.

“I named my child Zechariah, which means the Lord remembers, because when I look back I see God saying, “Pause, Rebekah. Trust in Me. I have a better plan,” she said.

“Zack did not ruin my life or my older son’s. He excels in school and is the perfect addition to my family. He knows the age-appropriate truth about his entry into the world.”

Rebekah has now made a mission of her life to offer help to moms who find pregnancy scary and challenging. In an endeavor to help women and spare them the trauma of abortion, Rebekah shares her experience with others on different forums 15–20 times a year.

She even met her husband, Kramer Hagan, while sharing her story at his parents’ church.

Now a proud mom of four children, Rebekah has numerous events lined up for the fall. “Our family stands with, supports, loves on, and helps moms in unplanned or unsupported pregnancies,” she said.

Rebekah hopes that one day when her son comes of age and knows the full truth, he will be proud of his mother and that he will see a “woman who made a mistake and who did everything in her power to undo that mistake and save her child’s life.”

Validating and glorifying her faith with her life journey so far, Rebekah believes that God can make any story new, “no matter how ugly or broken” and “offers grace even when we don’t deserve it.”

“God went as far to pull me out of the mess I created and saved not just my unborn baby, but He also saved me, and as a result, my family,” she said.

“I live out my faith by trying to love the broken—girls like me who are considering abortion. God radically transformed my life, and I am living to tell others He can do the same for them too,” she concluded.