‘The Sky Was Falling’: Memories of Growing Up Under Religious Persecution in China 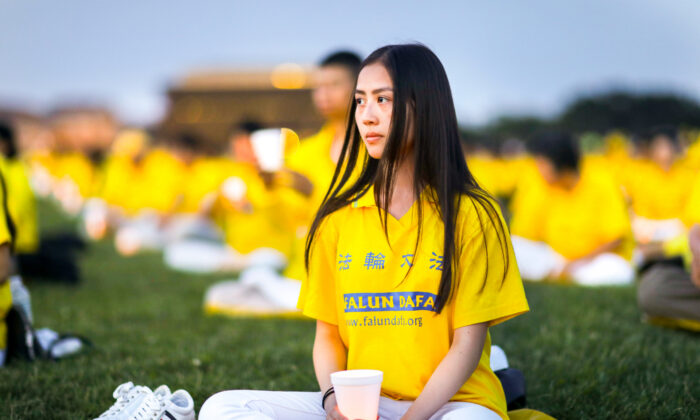 Falun Gong practitioners take part in a candlelight vigil commemorating the 20th anniversary of the persecution of Falun Gong in China on the West Lawn of Capitol Hill on July 18, 2019. (Samira Bouaou/The Epoch Times)

Jiang Lianjiao has been an outlier since birth.

As the fourth child in her family, she was not supposed to be born under China’s one-child policy. She had to be hidden in her grandmother’s home from the time she was one month old. She called her parents “aunt and uncle” until age 7 in order to evade authorities’ suspicions. Her parents spent all their savings—a big sack of pennies and dimes—to bribe local officials so that she could live at home with them.

After she was reunited with her parents at age 7, she began practicing a spiritual discipline called Falun Gong with them. Each day, around 30 people would join Jiang and her family in their apartment building’s courtyard to practice the meditative exercises together. Jiang, her sister, and parents traveled via boat to her father’s hometown in nearby Wufeng Township to demonstrate the meditation to fellow villagers. She and her sister were always in the front.

That blissful life came to an end overnight.

On July 20, 1999, Jiang, then 8 years old, found herself and her family targeted in a nationwide campaign to extinguish Falun Gong. Some practitioners who worked for the state were tipped off about plans to arrest and detain adherents. Despite this, dozens still showed up at Jiang’s courtyard for the exercises, undeterred. Police cars soon appeared, and officers brought everyone to the local police station. Her father was detained for a month.

The persecution was initiated by then-Communist Party leader Jiang Zemin (no relation), who considered Falun Gong’s enormous popularity a threat to the Party’s rule.

By the late 1990s, up to 100 million people in China were practicing Falun Gong, an ancient practice with moral teachings centered around the core principles of truthfulness, compassion, and tolerance. Over the following two decades, Minghui.org, a clearinghouse dedicated to documenting the persecution, would identify more than 4,500 adherents who died under torture. Due to the authorities’ extensive efforts to censor information around the topic, the true death toll is likely much higher. 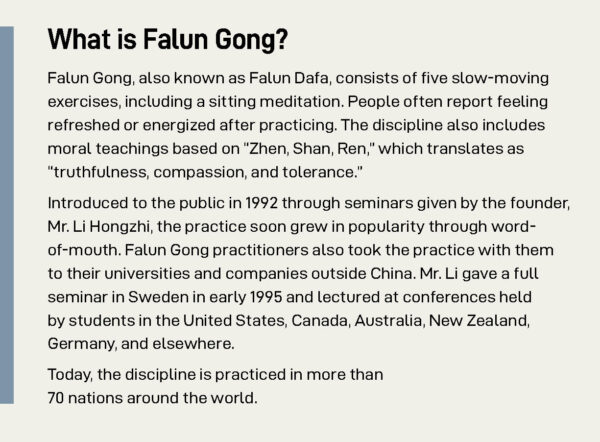 Home Turned Into a Prison

The abrupt turn of events made little sense to young Jiang and her family, nor to millions of other Falun Gong practitioners across the country, who were drawn to the practice for its healing benefits and calming effects but now faced arrests for their beliefs.

In 2000, Jiang’s family of six, along with about 100 other local practitioners, went to Beijing to appeal the Chinese Communist Party’s decision to suppress their faith. Almost as soon as they unfurled a banner reading “Falun Dafa Is Good” in Tiananmen Square, the police pinned her mother to the ground and kicked her as Jiang stood by, trembling in fear. They were dragged into police vans—her 16-year-old elder sister pulled in by her braids. A police officer waved a baton around, hitting Jiang on the head, causing her to faint.

Following this appeal, Jiang’s father was sentenced to three years in prison, while her mother got two years. Her 16-year-old sister was also detained for a month. Jiang, her older brother, and younger sister were left to fend for themselves at home. The eldest was just 12 at the time. Fearing they would run away, their building manager routinely locked them inside the house, only unbolting the door in the morning to escort the children to school.

During that time, Jiang and her siblings often struggled to find enough food. To stave off hunger pangs, Jiang would fill herself with water or eat wild plants in the fields nearby.

The family was slowly reunited after Jiang’s older sister and mother were released from detention. In 2003, her mother and older sister saw Jiang’s father for the first time in three years. He was still imprisoned and due to be released in a month. The formerly healthy man looked bony and had to be carried out by six men. He had missing teeth. His legs were crushed from repeated torture sessions, which left him on crutches. He had forgotten how to speak due to prolonged isolation. The torture was meant to “transform” him—to coerce him into giving up his faith.

It was a pitiable sight and devastating for the family, who had relied on him as the breadwinner.

It felt like “the sky was falling,” Jiang said.

Jiang Liyu, Jiang’s younger sister, was arrested in 2017 for putting up stickers with messages supportive of the practice. She is still in detention.

Before the persecution, her father was a top surgeon at a local hospital in Shiyan City in central China’s Hubei Province, and her mother worked as an administrative officer. After they were released from detention, the hospital slashed their pay to 250 yuan (less than $36) per month—less than a quarter of their colleagues’ earnings. Her father was demoted to toilet cleaner, while her mother was made to launder the patients’ bedsheets by hand.

To save money, the family turned off fans in the summer despite sweltering heat; the children wove bamboo curtains they sold for 1.1 yuan ($0.16) each. They only bought the cheapest food possible: rice contaminated with mice feces, and vegetables that were about to spoil. 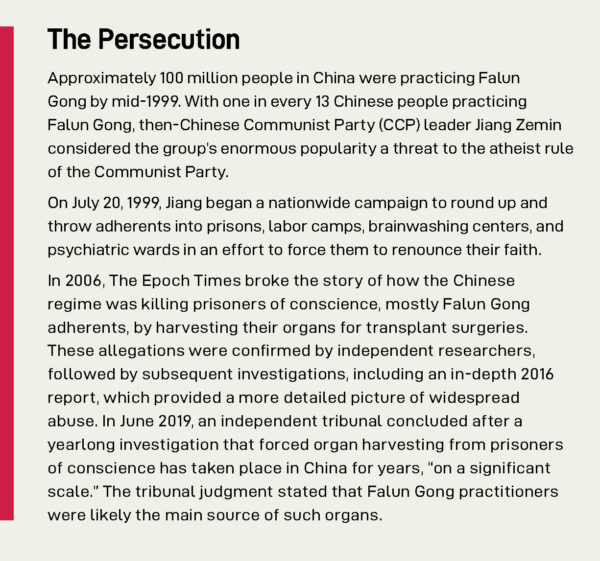 Over the past 20 years, the regime has broadcast damaging propaganda through state-controlled outlets in an attempt to vilify the practice and its adherents. The most infamous was a staged self-immolation performance on the eve of the Lunar New Year in 2001. This incident helped swing Chinese popular opinion against the practice.

The web of lies permeated the very fabric of Chinese society.

Annita Bao, a 30-year-old jewelry designer in New York and Falun Gong practitioner, fled China in 2016. She recalled that in her hometown of Wuhan, the capital of Hubei, all students at her elementary school were forced to sign their names on a huge banner that denounced the practice.

“It’s a show” to create the impression that the entire Wuhan population had turned their backs on Falun Gong practitioners, Bao said.

The neighborhood committee officers also frequently visited her home and inquired about whether she was still practicing, in the name of “caring about her academic performance.”

If the family refused to give up the practice, they warned, they would make a public announcement at Bao’s school to humiliate her. For years, Bao’s family kept the lights off in the living room so as not to alert the police that they were home.

Lü Zhongyang, currently an undergraduate at the University at Buffalo, said students at his elementary school in China were forced to watch and listen to defamatory videos and broadcasts. Similar propaganda was disseminated in school textbooks throughout the years.

The air was “depressing,” Lü said, “as if life may fall into pieces anytime.” His father, a news editor in Beijing, spent about four years in jail for writing on currency notes messages raising awareness about the persecution.

When Jiang’s parents were first detained, their hometown broadcaster, Shiyan Radio and Television Station, sought out Jiang and her siblings, saying that it wished to film some footage of them to show their parents that the siblings were doing all right.

Only after a neighbor came across the segment on television and told Jiang about it did the siblings realize they had been fooled: The videos were part of a propaganda program to describe how “obstinate” their parents were in practicing Falun Gong, and it claimed the state was taking care of the children, Jiang said.

“How can they do this—creating rumors by telling us lies?” Jiang said, calling the tactics “inhumane.” “Not only did they persecute [my parents], they also went out of their way to deceive the public. … It was extremely shameless.”

If fear was a recurring theme for these practitioners as they grew up under the shadow of persecution, today they try hard not to let it define them.

Jiang, whose great-grandfather was driven to madness during the Cultural Revolution for his belief in Daoism, vowed that “the adversity won’t crush my spirit.” The series of persecutions her family has experienced over generations, she said, has allowed her to see the regime’s true face and has motivated her to tell more people about the ongoing persecution in China.

“The damage the Chinese Communist Party has inflicted is not just about one generation … nor one kind of people,” said Jiang, who has since escaped from China. Submitting to the regime’s scare tactics would only encourage the authorities to act more out of hand. Only when you know the true situation can one emerge stronger, she said.

Like Jiang, Bao took up the practice when she was seven. She said her past experience has given her a “sense of mission.”

In her approach to designing jewelry, that translates to a strive for perfection while not emphasizing material benefits, she said.

“The more the [Party] thinks we are weak, the more we need to prove them wrong,” she said, adding that she took challenges as opportunities to elevate her character. “He who laughs last laughs best.”

‘Time is of the Essence’: Air Transat Welcomes...

Working From Within: How Lawyers in China and...