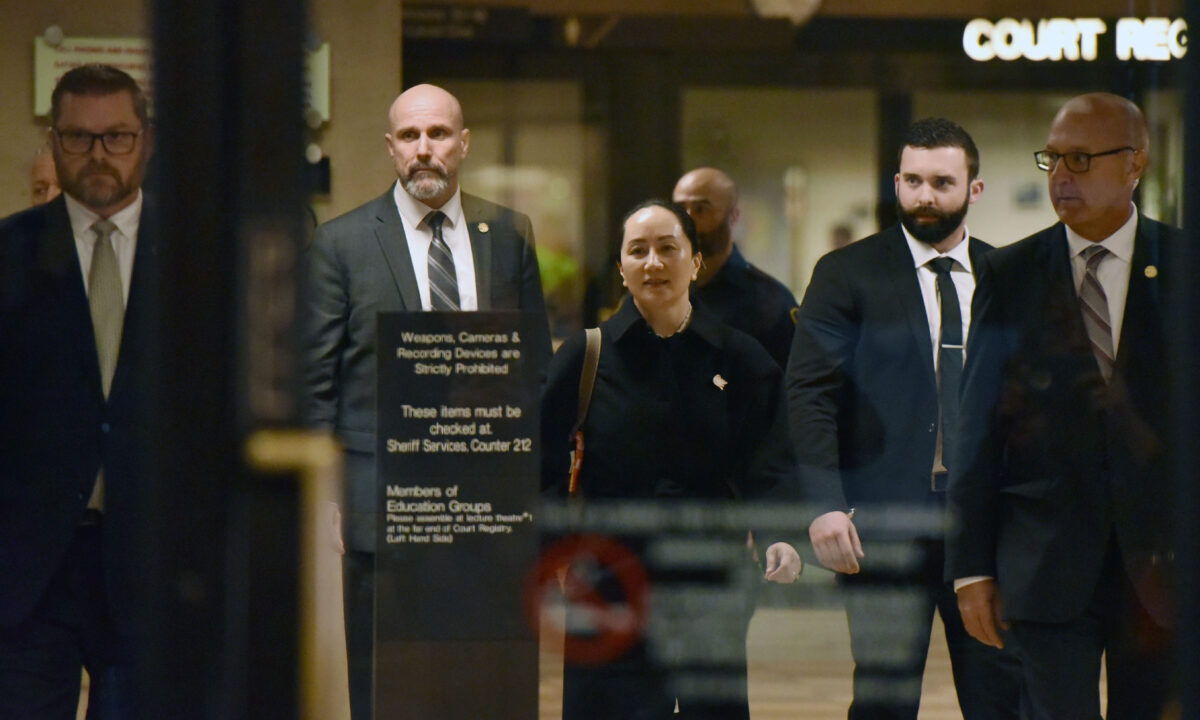 Huawei chief financial officer Meng Wanzhou, after a short morning session that ended the fourth day of trial in her extradition case, leaves British Columbia Supreme Court in Vancouver with her security detail on Jan. 23, 2020. (Don Mackinnon/AFP via Getty Images)

The Angus Reid poll found that this was a common trend among the 1,488 respondents who participated in the survey, with as high as 93 percent of respondents saying China can’t be trusted to uphold human rights.

Last week, 19 former federal cabinet ministers, parliamentarians, and diplomats signed an open letter urging the federal government to intervene in the extradition case against Meng in exchange for the release of Kovrig and Spavor, who have been arbitrarily detained in China since December 2018 and were charged with espionage on June 19.

But at a press briefing on June 25 Prime Minister Justin Trudeau rejected the idea, saying such a move could endanger Canadians abroad.

Trudeau’s stance gained a majority of Canadians’ support. The poll found that not only two-thirds of Canadians say the case should play out in the courts, but 81 percent say Chinese goods should be boycotted in Canada in response to the detention of Kovrig and Spavor.

Beijing had denied a direct link between the arrest of Meng and the detention of the two Canadian men until June 24, when a Chinese official admitted Ottawa’s intervention in Meng’s case could “open up space for resolution.”

In a media briefing June 24, Zhao Lijian, the spokesman for China’s foreign ministry, cited comments made by Kovrig’s wife to media outlets saying Canada’s justice minister has the power to end the extradition case “at any point.”

The open letter, which made a similar argument about the legality of Ottawa interfering in Meng’s case, was made public on June 23. The letter to Trudeau came under heavy criticism for rewarding China’s so-called “hostage diplomacy” tactics and setting a dangerous precedent by kowtowing to Beijing’s demands.

The poll also shows most Canadians think the approach of the Trudeau government is too soft on the Chinese regime, with 50 percent disagreeing that the government has handled tensions with China well.

Meng was arrested in Vancouver on Dec. 1, 2018, at the behest of the United States in connection with bank and wire fraud in violation of American sanctions on Iran. Nine days later, Kovrig and Spavor were detained in China.

With reporting by Justina Wheale.

Morneau Focused on Spending to Restart Economy Despite...