Trump Again Raises Prospect of ‘Decoupling’ US Economy From China 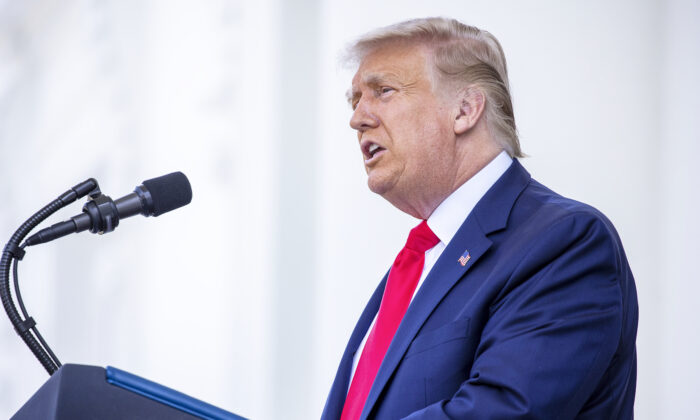 U.S. President Donald Trump delivers remarks during a news conference at the North Portico at the White House in Washington on on Sept. 7, 2020. (Tasos Katopodis/Getty Images)
BY ISABEL VAN BRUGEN

President Donald Trump on Labor Day again raised the prospect of decoupling the U.S. economy from Beijing, to bring back manufacturing jobs from China and key supply chains back to the United States.

The president on Monday reiterated parts of his second term economic agenda to make the United States “more prosperous and resilient than ever before” by reducing its reliance on Beijing.

As the presidential election nears, Trump has pledged as part of his reelection bid to reduce the nation’s reliance on China as the world’s biggest manufacturer. Last month, the president floated the idea of a complete decoupling from China during his second term, meaning cutting off economic ties for national and strategic reasons.

At the same time, he has accused his Democratic opponent, former Vice Presidement Joe Biden, of being soft on Beijing, pointing to his China policies as part of the Obama administration. Biden’s 2020 campaign has mentioned tackling China under its “Made in All of America” plan, which includes goals such as bringing back supply chains and reducing dependence on China by taking “aggressive trade enforcement actions.”

“If Biden wins, China wins, because China will own this country,” Trump told reporters Monday. “Today’s Labor Day—it’s a good time to talk about where we’re being ripped off by countries, but nobody’s even close to China.”

The president said in an interview with Fox News last month that he had learned that China could interfere in the Nov. 3 election on behalf of the Democratic presidential nominee.

“China owns Joe Biden. His son got a billion and a half dollars. His son with no experience, no brainpower, no anything, never did it, not only Ukraine, he got hundreds of thousands of dollars of money from Ukraine and the upfront payment and then with China he walks up with a billion and half dollars in fees. It’s ridiculous,” he said. “They own Joe Biden. They own him and they want me to it lose so badly.”

The president said that if reelected in November, his administration would prohibit federal contracts with companies that outsource to China and make the United States the “manufacturing superpower of the world.”

“We will … end our reliance on China once and for all,” Trump said. “Whether it’s decoupling, or putting in massive tariffs like I’ve been doing already, we will end our reliance in China, because we can’t rely on China.

“We will bring jobs back from China to the United States and we will impose tariffs on companies that desert America to create jobs in China and other countries,” he added.

In June U.S. Treasury Secretary Steven Mnuchin said a decoupling of the U.S. and Chinese economies will result if U.S. companies are not allowed to compete on a fair and level basis in China’s economy.

The president has made bringing manufacturing jobs to the United States a key element of his reelection campaign, noting that items such as electronics, machines, tools, air and space parts, vehicles, and iron and steel need to be domestically manufactured in order for the United States to be secure.

Trump also signed signed an executive order on Aug. 6 aimed at boosting U.S. production of medicines and medical equipment, lowering drug prices, and protecting the United States against shortfalls in a future pandemic.

“We cannot rely on China and other nations across the globe that could one day deny us products in a time of need,” Trump said last month.

In July, a China’s foreign vice-minister Le Yucheng said that decoupling the two countries’ economies would be “impractical” and “benefits no one.”

“The real enemy of the U.S. is not China. It is the invisible virus and growing non-traditional security threats. The U.S. should not treat a partner as an adversary because doing so will only wear each other out,” said Le. “Like it or not, globalization is the order of life and the tide cannot be reversed.”

Emel Akan and Reuters contributed to this report.