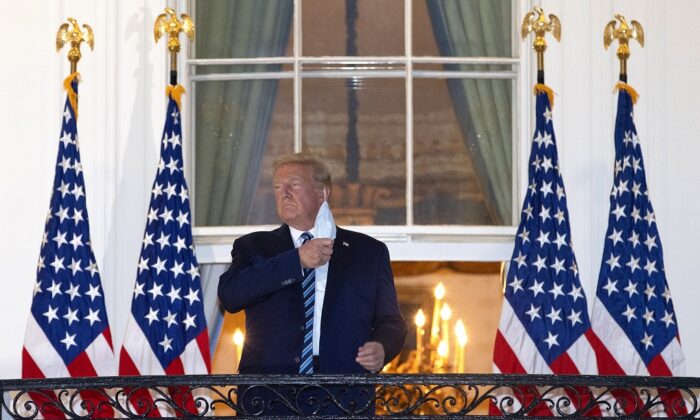 President Donald Trump’s White House physician said in a memo Wednesday that the president has been free of symptoms for a full day and that his blood tests show the presence of antibodies for SARS-CoV-2, the scientific name for the CCP (Chinese Communist Party) virus.

Trump, in a tweet on Monday evening after returning to the White House from the Walter Reed Army Medical Center, suggested he may have developed immunity to the virus, saying, “Now I’m better and maybe I’m immune.”

Conley added in the memo that Trump told him this morning that he “feel[s] great!”

A physical exam of the president showed that his vital signs, including oxygen saturation and respiratory rate, are stable and within a normal range, he noted.

“He’s now been fever-free for more than 4 days, symptom-free for over 24 hours, and has not needed nor received any supplemental oxygen since initial hospitalization,” Conley wrote.

“Having IgG antibody against SARS-CoV-2 is a good sign that his body is able to mount effective immune response against the virus. It is not clear yet whether those antibodies detected are neutralizing antibodies or not. Meanwhile, the antibody titer is not revealed to the public. So, it is not clear whether the protection level is strong enough. But overall, it is a good sign towards recovery,” said Sean Lin, former lab director of the viral disease branch of Walter Reed Army Institute of Research.

Trump tested positive for the CCP virus on Thursday, prompting a three-day stay at Walter Reed. The president said that he “didn’t feel so good” when he first set off to the medical facility, but that he “could have left” the hospital two days earlier than he did because he “felt great … better than 20 years ago” after receiving treatment.

Ahead of Trump’s discharge from Walter Reed, Conley told reporters that the president has continued to improve and has “met or exceeded all standard hospital discharge criteria.”

Besides First Lady Melania Trump, at least 11 other people within Trump’s orbit have tested positive for the CCP virus in recent days, including several who attended events with the president in the days leading up to his diagnosis.

White House of staff, Mark Meadows, said Wednesday that Trump “continues to work” from the residence, while a number of safety protocols are in place for when the president decides to return to the Oval Office.

“We’ve got a number of safety protocols with full [personal protective equipment]—masks, goggles and the like—for any direct interaction with the president in those areas,” Meadows said, noting also the presence of social distancing protocols and “testing on a daily basis.”

“We continue to have a number of areas where we have disinfectants for hard surfaces and the like, but the president continues to work. He’s in very good health, we’re pleased with his progress,” he added.

Meadows said the White House is carrying out contact tracing procedures, and that the findings do not support the supposition that all the cases of infections among members of the administration link back to a Sept. 26 event in the Rose Garden, where Trump officially nominated Judge Amy Coney Barrett as his pick for the Supreme Court.

Trump has said he plans to take part in the next debate with Democratic presidential nominee Joe Biden, scheduled for Oct. 15 in Miami.

The Staggering Job Loss of the Pandemic

Trump Transition Team Records Were Secretly Given to...