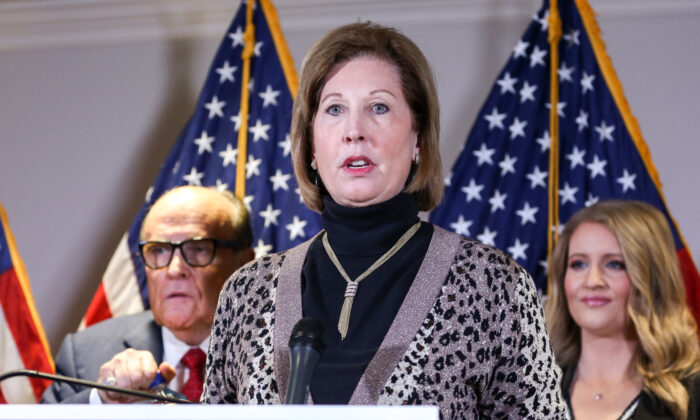 Trump campaign attorney Sidney Powell on Saturday said that the president’s lawyers will file a lawsuit of “biblical” proportions, alleging that some elections officials were embroiled in a pay-to-play scheme with a prominent manufacturer of voting software.

“We’ve got tons of evidence; it’s so much, it’s hard to pull it all together,” Powell told Newsmax. She didn’t provide or elaborate on the evidence.

“Hopefully this week we will get it ready to file, and it will be biblical,” Powell asserted, adding that “it’s a massive project to pull this fraud claim together with the evidence that I want to put in.”

The longtime lawyer and former federal prosecutor also alleged that there were modifications to some voting machines after the legal cutoff for changes.

Powell also said that some governors may have engaged in a pay-to-play scheme to use Dominion Voting Systems—one of the Trump campaign’s chief targets in recent days. “Georgia is probably going to be the first state I’m gonna blow up,” she claimed, accusing Gov. Brian Kemp of engaging in a pay-to-play scheme.

Kemp’s office has not responded to a request for comment, although Georgia Secretary of State Brad Raffensberger has frequently said there were no instances of fraud or irregularities in the state.

Dominion, in several statements to The Epoch Times, has categorically denied allegations of election tampering and voter fraud in recent days, saying that Trump’s team has peddled “falsehoods regarding Dominion” in recent press conferences and interviews.

“Dominion employees do not have access to the [canvass] adjudication system, nor do they operate it,” the Toronto-based firm said in a statement. It added that “access to the adjudication system resides with the election authority using it” and that “the system is controlled through secure and verifiable user accounts, and all voter intent adjustments are securely logged in the system and then recorded in the digital image of the ballot.”

Dominion also cited statements made by the secretaries of state in Michigan, Arizona, Pennsylvania, and Georgia, who also said they have found no evidence of voter fraud large enough to overturn the election.

However, the chairman of the Federal Election Commission, Trey Trainor, has repeatedly said there was voter fraud in key states.  “The massive amounts of affidavits that we see in these cases show that there was in fact fraud that took place,” he said during an interview with “Just the News AM” on Friday, while suggested a lack of transparency

The questions raised by the Trump campaign in recent days is “very important for the legitimacy of the presidency,” Trainor remarked.

Trump has not conceded. The Epoch Times will not declare a winner of the 2020 presidential election until all legal challenges have run their course.

Last week, Powell told Fox Business that she will prove Trump’s voter fraud case within the next two weeks or so.

“We have evidence now of information from the systems going to three or four different foreign countries during the time of the election, those countries themselves could have watched the live votes come in and changed the numbers,” said Powell. “There’s significant evidence of foreign interference from the worst communist countries on the Earth with our election.”