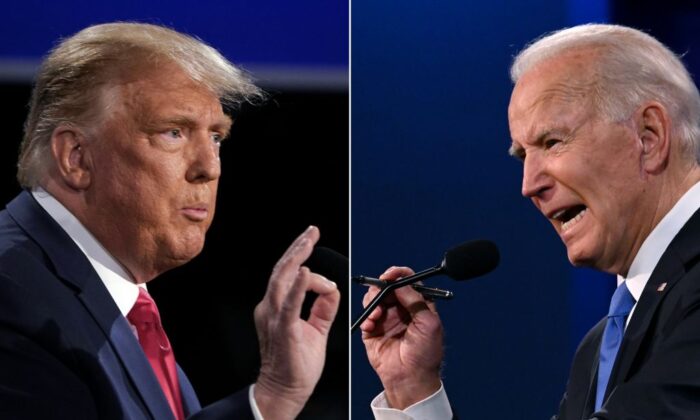 President Donald Trump during Thursday’s debate challenged Democratic presidential nominee Joe Biden’s claim that the administration has “no clear plan” for fighting the CCP virus epidemic and that a “dark winter” was coming.

“We’re about to go into a dark winter, a dark winter and he has no clear plan. And there’s no prospect that there’s going to be a vaccine available for the majority of the American people before the middle of next year,” Biden said.

Trump rejected the notion that his administration has no plan to fight the outbreak of the CCP (Chinese Communist Party) virus and pushed back against Biden’s claim that things would get worse.

“I don’t think we’re going to have a dark winter at all,” Trump replied. “We’re opening up our country. We’ve learned and studied and understand the disease, which we didn’t at the beginning.”

Trump acknowledged that there have been some “spikes and surges” in places but insisted they will soon be gone and that a vaccine “is coming—it’s ready,” and its delivery is imminent.

“It’s going to be announced within weeks. And it’s going to be delivered. We have Operation Warp Speed, which is the military is going to distribute the vaccine,” Trump said, referring to the administration’s pledge to produce 300 million doses starting in January 2021. It’s part of a broader strategy to accelerate the development, manufacturing, and distribution of CCP virus countermeasures, namely a vaccine, therapeutics, and diagnostics.

“More and more people are getting better,” Trump continued. “This is a worldwide problem, but I’ve been congratulated by the heads of many countries on what we’ve been able to do. If you take a look at what we’ve done in terms of goggles and masks and gowns and everything else, and in particular ventilators—we’re now making ventilators all over the world, thousands and thousands a month distributing them all over the world.

Biden responded by doubling down on the notion that Trump has “no plan” and spoke of projections for the number of deaths due to the virus this winter.

“The expectation is we’ll have another 200,000 Americans dead between now and the end of the year,” Biden said. “If we just wore these masks, the president’s own advisers have told him, we can save 100,000 lives. And we’re in a circumstance where the president thus far and still has no plan, no comprehensive plan.”

Biden then spoke about the kind of measures he would implement, starting with encouraging everyone “to wear a mask all the time.”

Trump challenged Biden on his plan, alleging the former vice president’s plan centers on more shutdowns, with Trump saying, “all he talks about is shutdowns. No, we’re not going to shut down.”

The moderator pressed Biden on shutdowns, asking: “What do you say to Americans who are fearful that the cost of shutdowns, the impact on the economy, the higher rates of hunger, depression, domestic and substance abuse outweighs the risk of exposure to the virus?”

“I’m going to shut down the virus, not the country,” Biden said, and spoke about standards that would trigger reopening rollbacks.

“The standard is, if you have a reproduction rate in a community that’s above a certain level, everybody says, ‘Slow up. More social distancing. Do not open bars and do not open gymnasiums. Do not open until you get this under control, under more control,’” Biden said.

To date, the CCP virus has infected over 8.6 million Americans, with over 228,000 dead and over 5.6 million recovered, according to Worldometers compiled data.