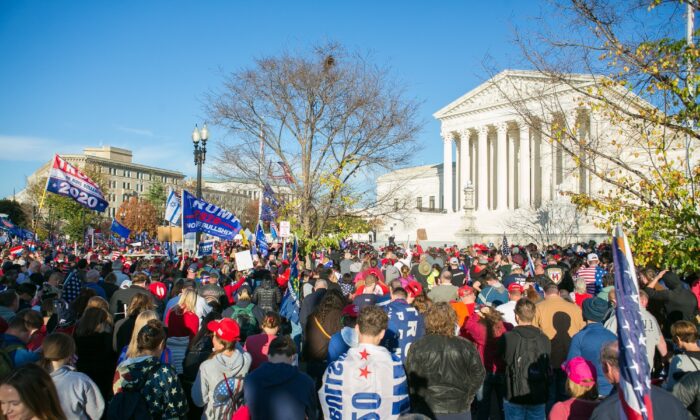 Trump supporters participate in the “Stop the Steal” rally from Freedom Plaza to the Supreme Court in Washington, on Nov. 14, 2020. (Lisa Fan/Epoch Times)
BY EMEL AKAN

WASHINGTON—Hundreds of thousands of people from all over the country joined a peaceful rally on Nov. 14 in the nation’s capital to show their support for President Donald Trump and his calls for election integrity, as part of a movement called “Stop the Steal.”

Supporters gathered at Freedom Plaza at noon and marched to the Supreme Court, protesting fraud allegations in the presidential election. People expressed concerns about election integrity and demanded every legal vote be counted. They also slammed mainstream media’s depiction of rally goers.

Dede Laugesen calls herself “a huge Trump supporter.” She joined the rally from Colorado.

“I really believe that this election is being stolen right out from underneath the Americans who voted for President Trump,” she said.

She launched a website everylegalvote.com to “tell Americans what the true story is, outside of the censorship of mainstream media and big tech.”

The website tracks election data and shares personally witnessed or publicly reported examples of fraud during the 2020 election.

“President Trump will be victorious at the end of the day, we just need to have social patience, and let the process complete itself,” she said. “It’s wrong for the media to declare the president.”

“This is America. These are ordinary average Americans and for the media to label us as far right extremists is to denigrate just ordinary Americans. They are lying to America.”

More than 50 rallies have been organized across the country on the same day. The event organizers called for protests at state capitols at noon, local time in every state.

Roberto Joel Guttierez, 18, an African-American student said he came to Washington “all the way from Boston, not only just for my president, but to support the United States of America.”

He said he was concerned about evidence of voter fraud, computer glitches, and observers being denied to watch ballot counting.

He said that the media “likes to portray a false narrative that all Trump supporters are white supremacists. But as you can see here, there’s people of all races—black, Asian, Hispanic. There’s all types of people.”

Flor Cerrato, an accountant from Los Angeles, Calif. joined the rally in Washington to demand transparency.

“We are demanding transparency. That’s basically what we want. We want every single legal vote to be counted,” she said.

Born to parents from Honduras, Cerrato also expressed her frustration about significant liberal bias in the mainstream media and social media.

“I have moved away from social media and from fake news media since the 2016 election. I moved away because I knew that there was something fishy going on,” she said. “I don’t want them to feed me with lies.”

Before the rally, Republicans Rep. Louie Gohmert of Texas and Representative-elect Marjorie Taylor Greene from Georgia,  and several prominent Trump supporters and conservative leaders gave speeches to the supporters at Freedom Plaza, asking for fair elections and transparent counting. Mike Lindell, founder of My Pillow; Ali Alexander, one of the organizers of the rally; and Ryan Fournier, founder and co-chairman of Students for Trump were among the speakers.

Alexander said the event was a grassroots effort, promoted by a coalition of about a hundred activists, influencers, and conservative groups.

He said the organizers faced “enormous challenges” from censorship by social media platforms. Facebook on Nov. 5 removed a “Stop the Steal” group, claiming it made calls for violence and sought to delegitimize the election process, charges Alexander said were false.

Eventbrite also pulled the Washington rally from its platform, citing misinformation. It also sent messages to everyone who signed up saying the event was canceled. Twitter also censored the link to their website https://stopthesteal.us/, only to reverse the decision later, Alexander said.

“I’m confident that America will withstand the challenge of this distraction and corruption,” said Ed Martin, another organizer of the event and president of Eagle Forum, a conservative organization.

“We’ll get to the bottom of it, and we’ll accept the result and do well. I hope the left accepts the result too, because I think they’re going to be surprised by what’s coming. I’m involved in some of the work. There’s a lot more systematic fraud that is going to come out.”

Martin estimated that nearly 500 thousand people joined the rally, though he said some media falsely claimed only hundreds of people took part.

Gene Waters, 72, is a senior intelligence analyst at consulting firm Booz Allen Hamilton and lives in Chesapeake, Virginia. He marched in Washington with his wife to show his support for President Trump.

“My major concern here is leaving and losing our American values,” he said. “Trump is true to the promises of conservative values.”

“There’s no room for communism over here. Socialism turns into communism,” said Diante Brown, 29, an African-American from Richmond, Va. Brown joined the rally with his wife and daughter to show his support for a fair election.

Trump tweeted about the rallies on Nov. 13, saying it was heartwarming to “see all of the tremendous support out there, especially the organic Rallies that are springing up all over the Country, including a big one on Saturday in D.C.”

The president’s motorcade drove by the supporters gathered for the rally in the morning,  giving two thumbs up to the participants.

The contested presidential election still remains undecided, as most state results haven’t yet been certified and legal challenges and recounts are pending in key swing states.

Many Asians also marched for election integrity. A Chinese-American from New York who called himself George took part in the rally to show his support for Trump.

“The Chinese Communist Party (CCP) is now persecuting all the religious people. People have no freedom at all in China. So, that’s the biggest evil in the world. We have to eliminate all the CCP,” he said.

He believes that former Vice President Joe Biden has deep ties with the CCP.

At the end of the rally, some Trump supporters were verbally and physically attacked by the members of the far-left Antifa network and the Black Lives Matter movement.

Celia Farber and The Epoch Times reporters Cathy He and Omid Ghoreishi contributed to this report.