Uniting America by Embracing Tradition and Standing Up to the CCP 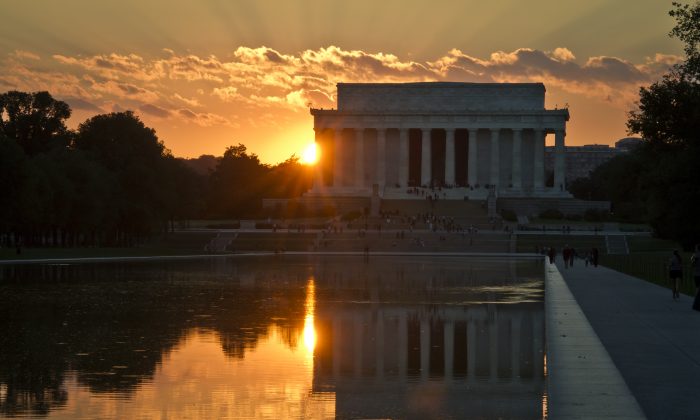 The sun sets behind the Lincoln Memorial in Washington on Sept. 30, 2013. (Mladen Antonov/AFP/Getty Images)

We suggest Americans can find unity by coming together to oppose an enemy who has for decades sought our nation’s destruction, and by renewing the tradition that has helped to shape and guide our nation.

At stake is more than America’s well-being. The United States is the leader of the free world; the unity or division of the United States—and its prosperity or decline—is vital to the destiny of the world’s people.

The CCP has not only gutted American manufacturing, stolen intellectual property worth hundreds of billions per year, and stolen military technology, but also infiltrated every aspect of our lives. The CCP strategy is to divide society by inciting hatred. This is the same strategy it used to seize power in China, pitting one group against another. For instance, CCP-related groups helped foment the riots in our big cities this past summer.

With Huawei’s promotion of its 5G services, the CCP is trying to get into our telecommunications, which is the nervous system of our country. With BeiDou, the Chinese regime’s version of GPS (Global Positioning System), and its ability to target satellites, the CCP has developed the ability to blind our military. By recently mounting pressure on Australia, the CCP is seeking to break the West’s alliance aimed at countering the Party’s influence.

With the Belt and Road Initiative, which many nations have joined, the CCP is trying to build an economic and military base to counter the free-world power of the United States. The communist regime has never stopped regarding the United States as its No. 1 enemy.

In fact, U.S. opinion recognizes the importance of countering China.

There is a consensus in Congress for countering the CCP. If President Joe Biden can adhere to the anti-communist line, he can protect the country under a policy that brings right and left together.

Unfortunately, the United States’ ability to adopt a strong anti-communist policy is hampered by the ways in which the CCP has affected our culture. Communists have sought to weaken the West by weakening its morality, tradition, family, and foundation in the belief in God.

“Marxism-Leninism ideology is being pumped into the soft heads of at least three generations of American students, without being challenged or counter-balanced by the basic values of Americanism and American patriotism,” Bezmenov said in a 1985 interview. “The demoralization process in the United States is basically completed already. … Most of it is done by Americans to Americans thanks to lack of moral standards.”

We are now seeing the results of this decades-long demoralization process. It is all around us, in our schools, in the news media, in movies and music, and even in the advertising we see.

Bezmenov warned: “A person who was demoralized is unable to assess true information. The facts tell nothing to him. Even if I shower him with information, with authentic proof, with documents, with pictures—even if I take him by force to the Soviet Union and show him [a] concentration camp—he will refuse to believe it until he is going to receive a kick in his fat bottom. When the military boot crashes him, then he will understand, but not before that. That’s the tragedy of the situation of demoralization.”

Fortunately, America has resources available to help us escape this tragedy.

America’s tradition provides the nation’s moral and political principles, its heroes, and the narratives that explain to Americans who they are. This binds Americans together in a common purpose that uplifts them and gives them purpose.

During the BLM and Antifa riots over the summer, these radical groups took direct aim at America’s tradition. About 188 statues were destroyed in two months, including those of our Founding Fathers George Washington and Thomas Jefferson, as well as of Jesus Christ and the Virgin Mary.

In such efforts as The New York Times’ 1619 Project, one sees an attempt to delegitimize our tradition, to recast the entire American story as being about the sin of slavery. This is a typical communist strategy. Such well-planned, well-executed actions to destroy a country’s tradition have been repeated in all communist regimes before.

The wiping of the memory of our history, and the trashing of our heroes and the great symbols of our national life, causes people to lose direction. A nation loses its guiding spirit. That begins a country’s clear decline.

On one side of our coin currency appears the slogan “In God We Trust.” On the other, “E Pluribus Unum,” Latin for “Out of Many, One.” The two are related.

America was founded by individuals seeking the opportunity to worship God freely.

Our nation, trusting in God, has been blessed. We have been a beacon of freedom to the world, enjoyed unprecedented prosperity, and helped to spread prosperity around the world.

In our Declaration of Independence, we state that our rights are a gift from God.

We recognize that our freedoms, and the limitations on those freedoms, come from a source above us. That common source, and the rights and duties it bestows, gives us a basis for principled unity.

Under assault from communism, our nation is at a crossroads. Every individual, from all walks of life, including those in government, Big Tech, the media, and corporations, needs to make the right choice.

The solution to this crisis is clear: Our nation needs to revive the living tradition that gives us our freedom and our unity, and to use that renewed strength to decisively defeat communism.