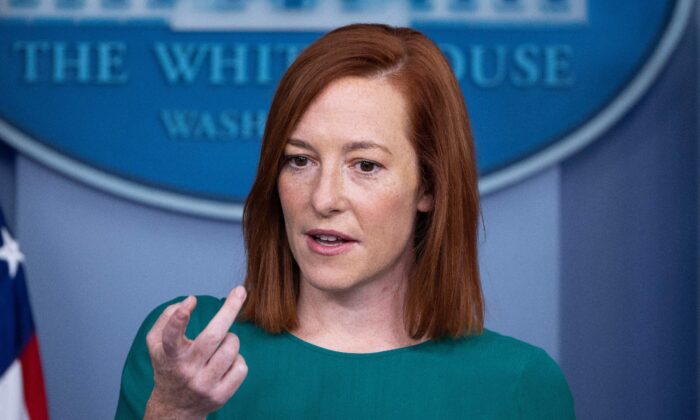 The White House signaled that it will continue a tough-on-China approach in response to a speech by Chinese leader Xi Jinping at the World Economic Forum that called for countries to cast aside “ideological prejudice” and “reject the outdated Cold War” mentality in efforts to fight global challenges.

“The comments don’t change anything,” White House Press Secretary Jen Psaki said at a press briefing on Jan. 25. “Our approach on China remains what it has been for the last months, if not longer.”

She said that the new administration seeks to tackle China’s threats with its own methods, adding that it aims to “play a better defense,” including holding China accountable for unfair practices, protecting U.S. data, and maintaining the United States’ technological edge.

“What we’ve seen in the last few years is that China’s growing more authoritarian at home and more assertive abroad, and Beijing is now challenging our security, prosperity, and values in significant ways that require a new U.S. approach,” she said.

In an address given at the World Economic Forum’s virtual event earlier on Jan. 25, Xi, speaking for the first time since U.S. President Joe Biden took office, signaled that Beijing has no intention of changing course in the near future, regardless of outside pressure.

While Xi made the statements in broad terms without mentioning names, his comments appeared to address the tough China policies set during the Trump administration, including the trade war, sanctions imposed to crack down on Chinese technology theft, and officials’ calls for reducing U.S. reliance on Chinese manufacturing.

“Confrontation will lead us to a dead-end,” Xi said, stressing that they “must not return to the path of the past.” He called for multilateral engagement, saying that nations must “avoid meddling in other countries’ internal affairs” and give priority to issues such as the pandemic recovery and climate change.

“To build small circles or start a new Cold War, to reject, threaten, or intimidate others; to willfully impose decoupling, supply disruption or sanctions; and to create isolation or estrangement will only push the world into division and even confrontation.”

Chinese state media and officials have consistently labeled the United States and its Western allies as having a “cold war” mentality over policies unfavorable to the regime.

Xi made no attempt to address growing international criticisms of the regime’s human rights abuses and its lack of transparency in handling the COVID-19 pandemic.

Xi’s “condescending” remarks marked a sharp change from the Trump era, when the regime often used a more conciliatory tone, according to China analyst Tang Jingyuan, who suggested that this indicates the Chinese regime regards the Biden administration as a “weaker competitor.”

Tang noted that Beijing placed sanctions on 28 Trump officials, including former Secretary of State Mike Pompeo, on Jan. 20, just minutes after Biden’s inauguration. The regime also continued its military aggression against self-ruled Taiwan, breaching the island’s defense zone by sending dozens of military craft on Jan. 23 and Jan. 24—its largest-scale military incursion this year. Beijing considers Taiwan part of its territory and has repeatedly threatened military force to bring the island under its fold.

While the new administration has criticized the Chinese hostilities, the wording in the statement—advocating for “a peaceful resolution of cross-strait issues”—conveyed a more softened message, Tang says.