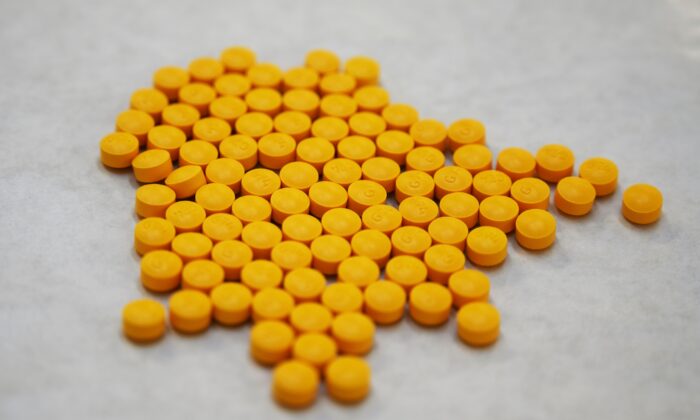 Tablets believed to be laced with fentanyl are displayed at the Drug Enforcement Administration Northeast Regional Laboratory on October 8, 2019, in New York. (Don Emmert/AFP via Getty Images)
BY CATHY HE

The United States on Aug. 25 sanctioned an alleged Chinese fentanyl kingpin, describing him as “one of the most significant drug traffickers in the world.”

Zhang Taotao, 32, a chemist and chemical supplier based in Shanghai, is accused of shipping fentanyl to the United States. Distributors would then press the drugs into large amounts of counterfeit pharmaceutical pills that were sold across the country, the treasury department said.

Fentanyl is a synthetic opioid that is up to 100 times more potent than morphine and 50 times more powerful than heroin. As little as two milligrams is considered a lethal dosage for most people. Over 31,000 people in the United States have died from overdosing on synthetic opioids in 2018, most of them being fentanyl-related, according to the Centers for Disease Control and Prevention.

China is the largest source of illicit fentanyl and fentanyl-like substances in the country, according to a 2018 report by the U.S.-China Economic and Security Review Commission (USCC).

The treasury department sanctioned Zhang and his Hong Kong firm Allyrise Technology Group Co. under the Foreign Narcotics Kingpin Designation Act. It said the firm is a front company for Zhang’s fentanyl-related financial transactions. The designation freezes any U.S.-based assets that Zhang and the Hong Kong company possess, and bars American dealings with them.

Zhang would use freight-forwarding services or ship the fentanyl via multiple people to disguise that the shipments were from China, the department said. Labeling on the parcels also misstated what was inside to avoid seizure by authorities. Once a package arrived in the country, U.S. distributors would then be able to press one kilogram (about 2.2 pounds) of fentanyl into up to one million counterfeit pharmaceutical pills to be distributed to domestic customers, it added.

Secretary of State Mike Pompeo in a separate statement called on Beijing to accelerate efforts to “regulate its chemical industry and reduce the diversion of precursors into the international black market.”

“The United States continues to seek cooperation with the PRC [People’s Republic of China] to tackle this supply chain threat,” Pompeo said.

While the regime had pledged to stem the flow of fentanyl into the United States, President Donald Trump and U.S. officials have criticized Beijing for not taking active measures to crack down on fentanyl production and distribution in China.