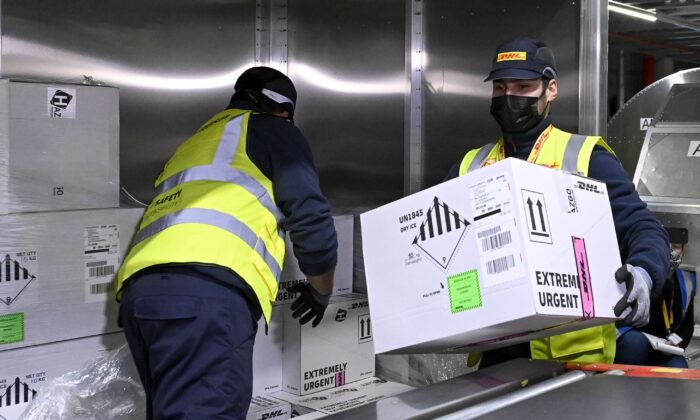 Workers at the DHL Express hub at Brussels Airport in Belgium, where COVID-19 vaccine manufacturer Pfizer is located, on Dec. 1, 2020. The airport has set up a task force to work on the logistics involved in the import and export of COVID-19 vaccines. (Dirk Waem/Belga Mag/AFP via Getty Images)

The prime minister’s recent announcement that Canada will get a COVID-19 vaccine later than other countries could put a dent in the public’s general approval of the Liberals’ handling of the pandemic, pundits say.

The United States, the U.K., and Germany have announced plans to begin vaccinations in December, but Canadian officials have said that, at best, three million Canadians will be vaccinated early in 2021, with priority going to front-line workers and people at risk.

Prime Minister Justin Trudeau said the countries where vaccines were manufactured would receive them first, adding that more than half of Canadians could get vaccinated by September 2021 “if all goes according to plan.”

“If this government is not delivering vaccines properly and in a reasonable time frame when they start to be available elsewhere, that will be a real problem for them. … There will be an erosion of the trust of the population. But also if they continue to spend as drunk salesmen, I think that this will have an impact,” Bernier said in an interview.

“The real number one concern for Canadians is this pandemic and getting out of it.”

Despite coming under intense pressure this week regarding how and when Canadians can begin receiving the vaccine, few details have been forthcoming from the government about how it plans to roll out the vaccine.

“They should have seen this coming ages ago. When President Trump announced that the Warp Speed program, if the Liberals were not so averse to doing anything with the Trump [administration], they should have said, ‘How can we help?’ but they didn’t,” said Barry Cooper, a political science professor at the University of Calgary.

“I mean, it’s obviously a foregone effort that the country is now having to deal with the consequences of. They’ve just been completely inept, not just with the vaccine but with everything.”

The lack of planning and apparent delays have presented an opportunity for the Conservatives. Party leader Erin O’ Toole said the Liberal government failed because it collaborated with Chinese company CanSino, only to have the Chinese government block shipments in August due to political tensions.

“If you look at the timeline, that’s when Canada started getting serious with Pfizer, Moderna, the other options,” O’ Toole said. “I would not have put all our eggs in the basket of China.”

Yet, Cooper doubts the Conservatives can capitalize on the ineptitude of the Liberals.

“I don’t think that the Conservatives in their present incarnation really have a serious way of dealing with the Liberals. They’re not really very aggressive.”

Cooper said the Conservative Party is too concerned with “the approval of Ontario and Quebec to begin with, and then with … the national media,” while the Liberals perpetuate “a genial incompetence that we have come to expect as normal.”

“It’s really quite bizarre how complacent Canadians are with respect to these guys, so they get to skate on despite everything.”

An Ipsos poll for Global News done prior to the vaccine announcements but released afterward showed six in ten Canadians supported Trudeau’s response to the pandemic, a figure that trailed the support given to premiers at 68 percent, and mayors at 73 percent. Liberal support was at 36 percent, with the Conservatives at 31, a gap only one point less than the previous month’s poll.

The potential for political points is hard to read, given the conflicted views Canadians have about a vaccine. Ipsos also reported that 77 percent of Canadians would “wait for reports about the effectiveness or any side effects” before taking a vaccine. Roughly seven in ten Canadians are nervous about taking a vaccine created and approved so quickly, with similar numbers concerned about potential negative long-term effects.

Paradoxically, 57 percent believe the vaccine will be “completely safe,” and 52 percent said they would take the vaccine as soon as it is available. Fifty-nine percent of Canadians support mandatory vaccination, a drop of 13 points since July.

On Nov. 29, Intergovernmental Affairs Minister Dominic LeBlanc insisted that Canada was “certainly in the top five” countries to receive a vaccine, thanks to federal contracts. In all, over 400 million doses from seven companies have been procured, the most per capita in the world. He said the government is working with the premiers on an efficient system to roll out the vaccines.

“Obviously, no vaccine is approved yet, so it’s a bit strange to hear anyone asking when anything will be injected in anyone’s arms,” Biollo told The Epoch Times.

“There’s rationale for going slow, being steady, and staying safe—as opposed to rushing vaccine development and distribution—as caution mounts regarding the long-term effects of a corona vaccine,” she adds.