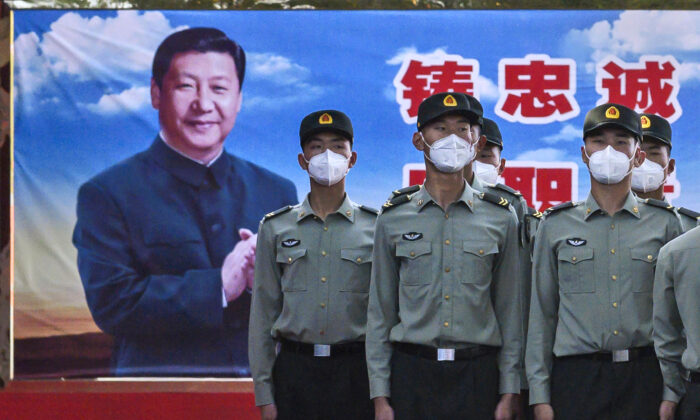 Soldiers of the People’s Liberation Army’s Honor Guard Battalion wear protective masks as they stand at attention in front of a photo of Chinese Communist Party leader Xi Jinping at their barracks outside the Forbidden City, near Tiananmen Square, in Beijing, on May 20, 2020. (Kevin Frayer/Getty Images)

Unless there is a way of conducting research so extensive that it can prove beyond a reasonable doubt the circumstances and where applicable, the motivations for the release of the coronavirus to the world, and some comprehensive international action against China results from it, it must be said that the coronavirus has been the most brilliant and imaginative geopolitical offensive of any major country since President Ronald Reagan’s Strategic Defense Initiative (SDI) was unveiled in 1983.

It will be recalled that despite being widely reviled as “Star Wars” and pilloried by the Bulletin of Atomic Scientists and others as requiring the launch to an altitude of 150,000 feet of an apparatus the size of the inter-war luxury liner, the 45,000 ton Aquitania, this proposal so perplexed the Soviet leadership, that it despaired of its ability to maintain nuclear military parity with the United States, and started down the road to disintegration.

Of course, those who said that it would take decades to bring the non-nuclear laser-based antimissile defense system into efficient operation were correct, and no leakproof version of that system exists yet. But Mr. Reagan and his advisors calculated that the Soviet Union was spending close to 50 percent of GDP on defense to maintain parity with the United States, and that the emergence of the possibility of a comprehensive anti-missile defense system would seriously rattle the Kremlin, and they were correct.

I do not impute to the People’s Republic of China the diabolical creation of the coronavirus in the Wuhan bacteriological laboratory, and then it’s systematic transmission to the world. There is disputed evidence on this point and Chinese anti-regime scientific sources have persistently claimed that that is precisely what happened.

There have been persecutions and disappearances among such accusers, and it would be naïve to assume that the Chinese leadership were ethically incapable of such a thing. I am no scientist, but it is more likely that the coronavirus emerged accidentally from the laboratory and into the public of the city of Wuhan.

It suited the convenience and is a tradition for the Chinese regime to claim that such viruses are inadvertently transmitted through the Wuhan live animal food market.

It is practically impossible to dispute that the Chinese state exercised its totalitarian authority in an attempt to stamp out the virus within China by taking drastic measures, while freely propagating it abroad. In support of this, the Chinese effortlessly co-opted the almost brain-washed complicity of the World Health Organization.

It is possible to grant the Chinese some latitude over their judgment of the likely damage their negligence in failing to contain the coronavirus or warn other countries of its dangers would cause. But it is now impossible to excuse them or to attach the slightest credence to its claims of innocence.

For a time Beijing blamed the coronavirus on itinerant members of the armed forces of the United States, and more recently on Italy, but it’s all piffle. This makes even more absurd than it would otherwise be the whining of the American left that President Trump is engaging in racism when he refers to it as the Wuhan or Chinese flu.

Whoever took the executive decision in the Chinese regime to spread this virus throughout the world (and it must have been at a very senior level), would have had some idea of the likely consequences, but cannot be credited with the clairvoyance of realizing how severely they would dislocate Western societies and disrupt the politics of some Western countries.

It is possible that they were aiming directly at the United States. If so, they should be condemned for what amounts to bacteriological warfare, long recognized as a diabolical and subhuman method of conducting hostilities, one to which not even Hitler or Stalin descended in World War II after the experience of gas warfare in World War I, (by which Hitler was personally afflicted).

It is conceivable that the Chinese strategists recognized that sending the coronavirus abroad in January 2020 could cause an immense public health crisis in the United States from which the president could be the political victim. That would not have been an unreasonable supposition. China might have expected even greater damage than has occurred, as none could be confident that a vaccine could be so quickly developed.

Prior to the arrival of the virus in the United States President Trump was generally thought likely to be reelected. He had almost ended illegal immigration and unemployment and was incontestably successful in most policy areas and had a huge following.

His opponents were somewhat resigned, but the arrival of the coronavirus gave the Democrats new hope, which they skillfully exploited. They were assisted by the president’s erratic public relations and tendency to minimize the importance of the illness, though his actual management of production of necessary equipment and development of a vaccine and his championship generally of a policy of determination rather than cowardice, were all commendable.

But his media opponents terrified the country with the specter of death from this virus, though it is only fatal to about one percent of people who contract it. His susceptibility to being accused of a cavalier attitude to the virus made him electorally vulnerable.

If President Trump is defeated, he will be replaced by a traditional appeaser of China, Joe Biden, whose family received millions of dollars for no obvious services rendered from China while Biden was the vice president, and he is pledging a more conciliatory policy towards China.

From the Chinese strategic perspective, the apparent decision of the American public to replace Donald Trump with Joe Biden would be a massive victory. And it is made even more delicious by the confused and enfeebled response to the coronavirus by almost all the principal European countries.

German chancellor Angela Merkel was on the skids anyway, but French president Emmanuel Macron and British prime minister Boris Johnson were lively and attractive young leaders when the coronavirus arrived and their on again-off again recourse to severe shutdowns imposed upon people with as great an aversion to government authoritarianism as any in the world has seriously diminished their political standing.

In a word, at little cost to itself, China, a country whose Party-state can enforce its will with no attention at all to the inconvenience of those whom it affects, may have gotten rid of its greatest rival in the world in President Trump and replaced him with a quavering former appeaser, reduced Western Europe to a gibbering flock of frightened geese, and has sent a message to Japan, India, South Korea, and its other neighbors that with a minor bacteriological indiscretion China can severely rattle any rival. It is one of the greatest triumphs of self-assertion in 3500 years of Chinese history and is a geopolitical masterstroke.

Should Trump in fact lose, it will be the responsibility of the feeble Biden administration and the shellshocked occupants of what used to be called the chancelleries of Europe, to try to counter, if not punish, this Chinese thunderbolt. Let no one doubt that the entire Western world has suffered a crushing, though far from irreversible, defeat at the hands of the masters in Beijing.

Conrad Black has been one of Canada’s most prominent financiers for 40 years, and was one of the leading newspaper publishers in the world. He’s the author of authoritative biographies of Franklin D. Roosevelt and Richard Nixon, and, most recently, “Donald J. Trump: A President Like No Other,” which is about to be republished in updated form.