Viewpoints: May the Force Be With Them: Scientists Fight Back 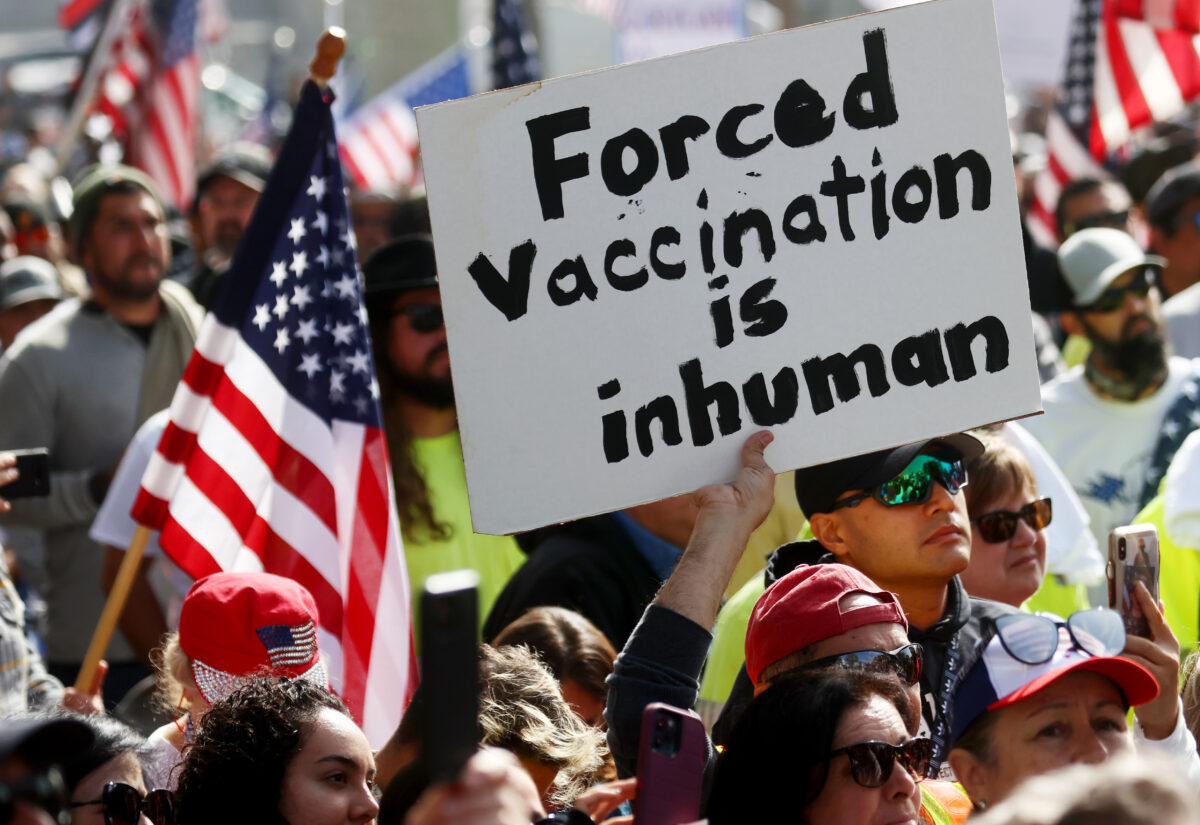 BY Joe Wang and Jennifer Margulis

SARS-CoV-2 started in Wuhan in late 2019. After several waves swept through the world and left millions of people dead, the world is now entering the endemic phase. The scars that COVID-19 have left behind, however, are very fresh and very deep. Leaders in government, science, and medicine, along with the general public, must work together to heal, and to make sure that these scars do not turn into a cancer that eventually kills humanity.

The Chinese Communist Party (CCP) governs China by controlling every aspect of people’s lives. When SARS-CoV-2 emerged in Wuhan in December 2019, the CCP was in a celebratory mood. It planned to showcase its economic achievements and celebrate the Chinese New Year with huge banquets. No virus should have dared to come to spoil the party. Therefore, the CCP silenced those people sounding the alarm.

Then, when they found out that the virus was spreading and killing many, in order to show the world that they were powerful and capable of controlling viral spread, they implemented a draconian lockdown in Wuhan.

The CCP then intentionally allowed the spread of the virus to the rest of the world by continuing international flights out of Wuhan while cancelling domestic flights. In this way, the CCP protected itself while infecting other countries.

As a result, the rest of the world suffered huge losses while China enjoyed zero-COVID for most of 2020 and 2021. The CCP then took every opportunity to “educate” the world that their system is better than the inefficient western democracy and should be implemented across the whole world for the sake of “the shared destiny of humankind”. After all, it was in the CCP’s Constitution (as revised in October 2017) that it is CCP’s duty to advance “the shared destiny of humankind” with the CCP’s superior governing system.

Xi Jinping even suggested honoring the CCP with a gold medal in COVID control at the party celebrating the conclusion of the Beijing 2022 Winter Olympic Games.

Unfortunately, many in the West admired the CCP and followed the CCP’s playbook.

The Lancet, Nature, and many other scientific journals praised the Chinese response. For example, the Lancet published an article on April 18, 2020 claiming, “The quick containment of COVID-19 in China is impressive and sets an encouraging example for other countries.”

But for those of us who noticed that the public health information being disseminated often contradicted itself, it seemed that Dark Forces had been in control.

Some of us have known all along that the public health agenda of advancing pharmaceutical talking points, disseminating fear, and insisting that only a for-profit, rushed to market vaccine would not stop COVID.

Others of us are just waking up to the inconvenient truth that the entire pandemic response may have been wrong and that our blind obedience and trust in authority were misguided.

No matter what your beliefs are about COVID, vaccines, lockdowns, social distancing, masking, and school closures, however, it’s important to understand that the only way out of the collective mess humanity is in right now is to be willing to disagree, talk honestly, and encourage the process of scientific inquiry.

Yet since the beginning of the COVID crisis, when honest scientists, professors, and medical doctors began to speak up, they were, and continue to be, silenced, canceled, de-platformed, and defamed.

Even now, “science” has become so politicized that doctors willing to speak truth to power have lost their jobs, their social standing, and their licenses to practice medicine.

Just a few months into the pandemic, scientists start to question the COVID measures being implemented.

Health care professionals noticed that when their patients were put on ventilators, instead of recovering, they were dying.

Others saw that COVID was treatable, and that they could use a combination of off-label drugs like ivermectin and anti-inflammatory steroids to calm the immune system’s cytokine storm that the virus seemed to provoke in order to help their patients recover.

They described themselves as infectious disease specialists and public health scientists who have “grave concerns about the damaging physical and mental health impacts of the prevailing COVID-19 policies.”

Published in October of 2020, the Great Barrington Declaration currently has more than 930,500 signatories.

The Declaration pointed out that school children and the underprivileged were “disproportionately harmed.”

As hopeful as the Declaration made many feel, it was relentlessly criticized and largely ignored. It seemed that throughout 2021, many people preferred to blindly put their trust in the government and in what a growing number call the government’s lies.

For whatever reasons (political, emotional, Dark Forces), people throughout the free world were willing, and even eager, to allow newly minted pharmaceutical billionaires to forward a narrative that lined their corporate pockets. It was as if the world were gripped by a dark force.

But 2022 has not turned out to be “2020 too.” Instead, starting in January of 2022, major scientific journals are rebelling against the one-sized-fits-all no-debate-allowed agenda. It was then that the British Medical Journal, one of the most prestigious health journals in the world, published an editorial insisting that the raw data that has been used to justify such an aggressive worldwide push to get the COVID vaccine be made fully and immediately available for public scrutiny.

Three months later, an editorial was published in the April edition of Surgical Neurology International: “COVID UPDATE: What is the truth?” by retired neurosurgeon Dr. Russell L. Blaylock. Blaylock was frank and direct in his condemnation of the public health policies implemented to contain COVID-19.

Indeed, he unapologetically calls the pandemic “one of the most manipulated infectious disease events in history, characterized by official lies in an unending stream lead by government bureaucracies, medical associations, medical boards, the media, and international agencies.”

Real Science Is Not Dogmatic

Fake science is dogma that cannot be debated, nuanced, challenged or changed. Real science is not dogmatic. It can be debated and considered. But scientific freedom can only be defended when each one of us stands up and defends it.

Now for the good news. There are indications that the pro-science pro-freedom movement is becoming more mainstream every day.

In March, Joe Wang attended a conference in Washington, D.C. to inaugurate the Academy for Science and Freedom at Hillsdale College. This new academy’s mission is to educate people about “the free exchange of scientific ideas and the proper relationship between freedom and science in the pursuit of truth.”

Everyone who attended the conference was already aware, to some degree, of the American government’s war on science. But there we were, in America’s capital, able to hold a conference criticizing the rich and powerful, without having the police knocking at our door. Just ask yourself, what happened to Dr. Li Wenliang, the Wuhan whistleblower in 2020, who purportedly died of the virus in a Chinese hospital? And what happened to the top COVID expert in Shanghai, Dr. Wenhong Zhang, who had to give up his belief of co-existing with the virus and “full-heartedly” endorse the Xi Jinping’s zero COVID policy?

We must use of what limited freedom we still have now in the United States to avoid the fates of Dr. Zhang and Dr. Li.

In April, Jennifer Margulis attended a medical freedom conference for doctors and other healthcare workers in Conroe, Texas. It was hosted by pediatrician Angelina Farella, a conventionally trained doctor who has testified against the COVID vaccines. Dr. Farella’s testimony has led biased media outlets, including The Independent, to give her the moniker of being an “anti-vaccine” doctor despite the fact that she gives vaccines in her office every day. Over eighty medical doctors attended the conference, sharing their clinical data and successful treatment protocols.

“People are sick and dying and doctors won’t treat patients,” Ben Marble, M.D., an emergency room doctor, said. “Is this a 2-year long Twilight Zone episode or what?”

He called the way patients were being treated in the emergency rooms an “epic failure” and explained that he quit his job as an emergency room doctor in order to be able to treat patients. Marble, who founded a website that treats people for free called MyFreeDoctor.com, said, “[We’ve] treated over 200,000 people for COVID and lost six.”

May the Force Be With Scientists and Doctors Who Fight Back

The fight for scientific freedom is important to our lives, and the lives of generations to come. To be honest, scientists and doctors are not particularly good at these kinds of fights, which involve not only science, which they are good at, but also interacting with politicians, the mainstream legacy media, and social media.

Luckily, the scientists and doctors are stepping up anyway and it’s time for us to join them. It’s time to say enough is enough, just as Blaylock has.

Silencing free speech and co-opting science can have deadly consequences. “The first thing that the Nazis did was fear, propaganda, and censorship,” says Vera Sharav, a child survivor of the Holocaust.

She said, “The free press was ended the minute Hitler took over. Information is freedom. People who are informed do not march in unison. It’s only those who are being fed lies that frighten them and that keep them in a state of total anxiety who will follow orders without a second thought. They’ve become conditioned not to trust their own instincts.”

As founder and president of the Alliance for Human Research Protection, Sharav has been speaking openly about the disturbing parallels between the German state’s control of information in the 1930s and today’s trend to silence dissent. For instance, the Germans justified eugenics, which was widely accepted among scientists even in the United States, by insisting that they were “following the science,” Sharav said.

We all need to rally behind the scientists, researchers, and doctors who are striking back. It is only with our support that the side of what is true will prevail and vibrant and long-lasting good health be realized.

Jennifer Margulis
Jennifer Margulis, Ph.D., is an award-winning journalist and author of “Your Baby, Your Way: Taking Charge of Your Pregnancy, Childbirth, and Parenting Decisions for a Happier, Healthier Family.” A Fulbright awardee and mother of four, she has worked on a child survival campaign in West Africa, advocated for an end to child slavery in Pakistan on prime-time TV in France, and taught post-colonial literature to non-traditional students in inner-city Atlanta. Learn more about her at JenniferMargulis.net
Source
healthviewpoints
Share
0
FacebookTwitterLinkedinRedditWhatsappEmail