Viewpoints: We Are in a War for America’s Soul 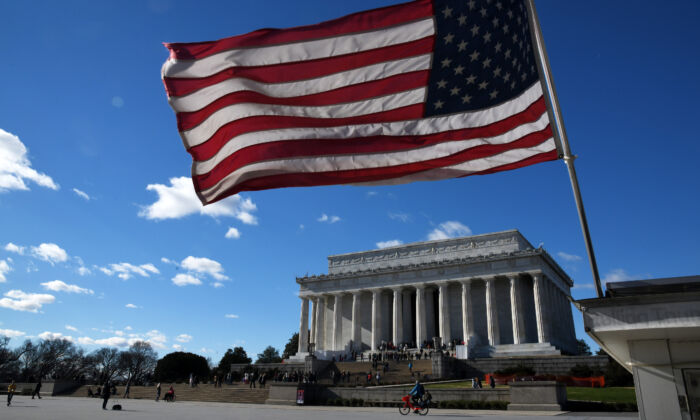 An American flag flies near the Lincoln Memorial on December 22, 2018. (Olivier Douliery/Getty Images)

My career has taken me around the world, including the combat zones in Iraq and Afghanistan to support our troops. These travels have helped me appreciate how fortunate I am to have been born in America—home of the free because of the brave.

On the 20th anniversary of the 9/11 terrorist attacks in the United States, people across our nation gathered in remembrance of the lives lost and the heroes who selflessly gave their lives to save others. On Sept. 11, 2001, I was in Washington, D.C., and saw the hole in the Pentagon. Later, I traveled to New York City and saw the massive hole where the Twin Towers once stood. Those are images I will never forget.

In 2002, I was recruited into government service to lead necessary change and transformation in the intelligence community (IC), including better integrating our imagery and signals intelligence enterprises—America’s eyes and ears. I was sworn in as a senior executive in defense intelligence and was a civilian peer to general and flag officers. After the Office of the Director of National Intelligence (ODNI) was established, I was sworn in as the first IC deputy chief information officer at ODNI. In that role, I worked across the 17 agencies that comprise the U.S. IC and regularly met with the leadership of both the IC and the Department of Defense.

Through my 25 years of service in the national security community and study of history, I have become aware of the techniques, tactics, and procedures that our enemies use. Though the Cold War ended 30 years ago, our nation is still in a war that has been brewing for decades—a war for America’s soul.

Nikita Khrushchev, who ran the Soviet Union from 1958 to 1964, openly predicted the destruction of the United States and said that it would happen in the way that every society eventually collapses. He said, “We will take America without firing a shot. We do not have to invade the U.S. We will destroy you from within.” Khrushchev was talking about an entire system of Marxist indoctrination and takeover that they had refined and executed in country after country during the 20th century.

Soviet defector Yuri Bezmenov, a former KGB operative, and high-level Russian propagandist, escaped to the West in 1970. He warned America about the KGB tactics used to subvert a nation that he witnessed firsthand in the Soviet Union. This is a planned process of altering the way people think for a particular purpose, which is to affect a regime change. It’s effectively the brainwashing of society—a slow, methodical transformation. Those who conduct this ideological subversion are very patient to employ the tactics over decades.

Ideological subversion has four stages and follows the Hegelian dialectic, a tactic long exploited by Marxists and Fascists to control people.

These steps are repeated over and over, bringing a greater result with each cycle until there’s a controlled collapse. America could be on the verge of collapse right now unless we collectively wake up to reality and take a stand to stop tyranny.

The Hegelian dialectic is the framework for guiding people’s thoughts and actions into conflicts that lead them to a predetermined solution. The enemies of America are using this tactic to create fear, turn citizen against citizen, and divide our nation. A house divided cannot stand. If people do not understand how the Hegelian dialectic shapes their perceptions of the world, then they do not know how they are helping to implement the agenda, which ultimately is to advance humanity into a dictatorship—whether by the fascists, the communists, or the globalists and their New World Order. We must step outside the dialectic so that we can be released from the limitations of controlled and guided thought.

The most important thing about America is liberty. America is what has stood between power-hungry people and their goals of world domination. The true enemies of America are trying to convince us that we are each other’s enemies and that big government and control of the lives of the many by a few is the solution to cure what ails us. We must all recognize that they are weaponizing the crisis and this narrative is a lie. Government bureaucrats are now labeling anyone who thinks they have overstepped their constitutional bounds as enemies of the state—“patriot terrorists.” What liberty-loving people are now combating is pure evil.

All it takes for evil to prosper is for good people to do nothing. As we reflect back on Sept. 11, 2001, one thing that stands out about that time following the terrorist attacks is that we forgot the things that divide us. We united as Americans. There’s no better example than what we saw in New York City. We were united together in support of one another fighting a common enemy.

So many have sacrificed so much to secure our liberty and preserve it for future generations. Many of us have lost a loved one on a foreign battlefield or from a service-connected illness after they returned, or in the line of duty here at home. How do we honor their sacrifice and that of so many others in our nation’s 245-year history? We stand and fight to uphold liberty and our unalienable rights enshrined in America’s founding documents. If liberty is to be lost, it won’t be on our watch.

Michele R. Weslander Quaid
Michele R. Weslander Quaid, president of Sunesis Nexus, is a certified professional coach, consultant, and speaker with 25 years of career experience in the national security community. She was recruited into government to lead innovation and transformational change in defense and intelligence following the terrorist attacks of Sept. 11, 2001, and served in various senior executive roles including the first deputy Chief Information Officer for the Director of National Intelligence.
Source
commentaryUS News
Share
0
FacebookTwitterLinkedinRedditWhatsappEmail