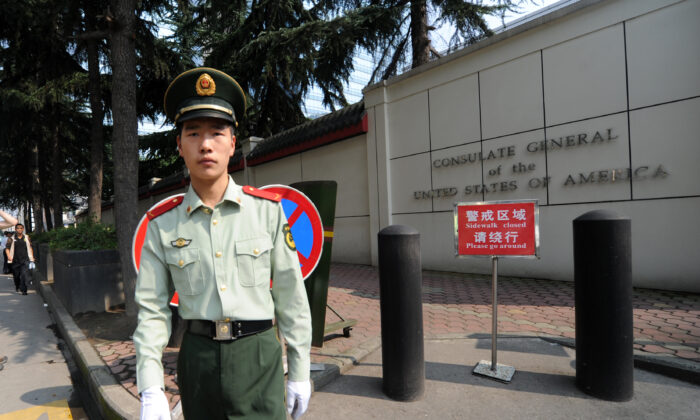 A Chinese paramilitary policeman stands guard at the entrance of the US consulate in Chengdu, southwest China’s Sichuan province on Sept. 17, 2012. (Goh Chai Hin/AFP/GettyImages)
BY EVA FU

“Our action to direct the closure of PRC Consulate General in Houston was taken to protect American intellectual property and Americans’ private information,” said National Security Council spokesperson John Ullyot in an emailed statement, referring to the People’s Republic of China.

He said that Beijing has for years “undertaken a whole-of-society effort” stealing American intellectual property while restricting American diplomats in China from performing their duties.

“We urge the CCP to cease these malign actions rather than engage in tit-for-tat retaliation,” he said.

The United States on July 22 ordered the Chinese consulate in Houston to close, citing “the PRC’s violations of our sovereignty and intimidation of our people” as well as “unfair trade practices, theft of American jobs, and other egregious behavior,” in a State Department statement.

In a briefing on Friday, a senior State Department official said the Houston consulate has been involved in attempts to steal U.S. research into the CCP virus vaccines.

A Justice Department official said that while it’s accepted that all diplomatic missions conduct some level of espionage activity, the operations run out of the Chinese consulate in Houston “went well over the line of what we’re willing to accept.”

“At some point, you say ‘enough is enough’ and you decide which are one of the worst offenders,” the official said.

Despite the row, the State Department official said they will continue sending back U.S. diplomats who had returned from China earlier this year due to the virus pandemic.

On Friday, the foreign ministry, in what it called a “legitimate and necessary response” to Washington’s “unilateral provocation,” ordered the closure of the U.S. consulate in Chengdu, the capital of China’s southwestern Sichuan Province.

The Chengdu branch is one of six U.S. diplomatic missions in mainland China, in addition to one in Hong Kong.

“Some staff of the U.S. Consulate General in Chengdu have engaged in activities inconsistent with their capacities to interfere in China’s internal affairs and undermine China’s security interests. China has lodged representations on multiple occasions and the U.S. knows that very well,” said Wang Wenbin, a spokesperson for the ministry, at a Friday press conference.

The hawkish state-run newspaper Global Times defended Beijing’s decision in a Friday editorial, accusing the U.S. administration of “dismantling the construction of China-U.S. relations almost with a bulldozer” and declaring that China will close the same number of U.S. consulates as a countermeasure if the United States decides to take further action.

It also ran an article on July 23 with the headline, “U.S. consulate in HK loathed as ‘spy center,’” claiming that online Chinese media polls show “the majority of Chinese believe the facility should be shut down.”

Asked during a Fox News interview whether the United States will withdraw consular staff if China closes its branches, Secretary of State Mike Pompeo on Thursday did not directly address the issue, but said the decision to close China’s Houston consulate was consistent with all U.S. policies and that more actions will be coming “until we get the change.”

“And so the Chinese Government will get to make its decisions about our diplomats there inside of China. We’ll make sure that we do right by the American people,” he said.