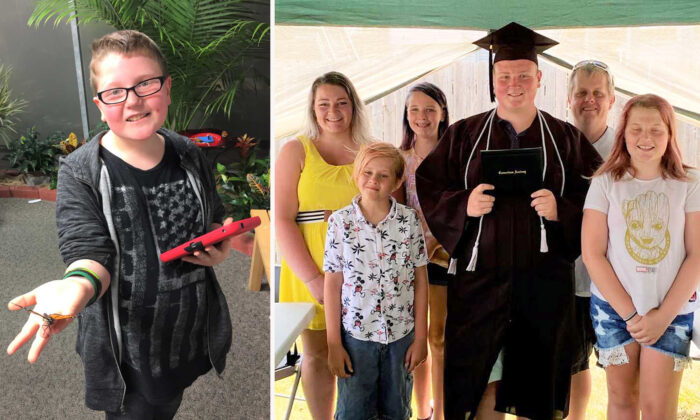 Marveling at her son’s amazing journey from a misunderstood 9-year-old to a high-achieving college freshman, a Minnesota mom regrets nothing. Except, perhaps, not saying “yes” to adoption sooner.

It all began when Emily Boettcher was walking down a hallway with her daughter at Isanti Elementary School after a school conference and she stopped to listen to a social worker discussing foster care.

“I drove the short five minutes home, walked in the door, and announced excitedly to my husband, ‘We are going to foster!’” Emily recalled, sharing her story on Love What Matters.

Emily and her husband, Brandon, were on the same page. They obtained their fostering license together and received a placement immediately, a difficult child whose parents needed a break.

Zackary, aged 9, was older than Emily and Brandon’s two children. Upon agreeing to “respite care,” the Boettchers received a supervised visit from Zackary’s mother, Rachel, and the trepidation set in.

Rachel forewarned the couple that her son would “make everything more difficult than it had to be.” He destroyed things, she said, stole knives and lighters and hid them under the bed, and sometimes also hid pets under the bed that he brought from outside, which were often found by his mom to be dead in a box.

Additionally, Rachel also said that he could not be taken to stores, restaurants, or on vacation because he was “so embarrassing,” as he would end up making a scene there.

When asked what Zackary enjoyed when he was good, Rachel replied, “I don’t know, he is never good enough to get a reward.” Hearing that statement, Emily’s heart sank.

Upon arrival at the Boettchers’ house, however, Zackary was quiet and polite, confusing his hosts. He claimed not to be a picky eater, which was what they had expected, but when pressed, he confessed to loving Hamburger Helper. Brandon went to the store, and the family got their first glimpse of Zackary’s loveable personality.

“[H]e casually said, ‘I can’t believe I really got to have this!’” Emily recalled. “Then he giggled and said, ‘I should have asked for steak and lobster!’”

Zackary was adored by the Boettcher family, and just like that, his visits became regular. “He was the opposite of everything we expected,” said Emily.

One spring afternoon, Zackary broke his arm while giving a pair of wheelies, that Emily bought him, a spin. Rachel was called and told her son was going to be taken to the emergency room. This was the first time Emily got the opportunity to see both the mom and son interact at the hospital.

“This is when I saw a young boy, dying for attention from his mother, start acting out because she was dead set on ignoring his needs,” Emily recalled. “[N]either parent nor child was ‘bad,’ they just didn’t know how to be with each other.”

After witnessing that incident, Emily and Brandon started working with Rachel and Zackary’s social workers, skill workers, and therapists but to no avail. Zackary wasn’t safe at home and started failing school. Thus he then moved in with the Boettchers full time. Still, Emily wasn’t ready for adoption and was hoping that the troubled mom and son could work things out.

However, things changed when Zackary called Emily in tears one fall night when he was paying a visit on the weekend to his mom. He said his mother was out of control and he was scared. Hearing him on the other end of the line, Emily rushed to pick him up.

As he sat with her on the driveway in her car, he said that his mother had threatened to send him to a facility for being “a bad kid” and for “wrecking her life.” As he said those words, he questioned why didn’t anyone like him and why he couldn’t behave in a certain way.

Meanwhile, back at home, Brandon interjected as Zackary shared his fear that nobody wanted or loved him. “We want you,” said Brandon. “We love you and you always belong here, no matter what.”

Meekly, Zackary asked the couple if they would adopt him.

Recalling it as one of the best moments of her life, Emily explained, “He was the piece we didn’t even know was missing until he came into our lives.” The Boettchers said yes, and Rachel relinquished her parental custody.

At the time of writing, Zackary, who graduated high school with a 3.93 GPA, is a thriving college freshman. “[He] is one of the most loving people we know,” said Emily. “He is constantly amazing us with his courage to just keep giving life his all.”

Besides academics, Zackary holds a position in catering working alongside Emily. He even volunteers at a local farm assisting horses and helping with property maintenance. But perhaps his biggest impact to date has been upon his adoptive family.

“Who knew a small little boy would change our lives in the best way possible,” Emily reflected, “teaching us to all be a little braver.”