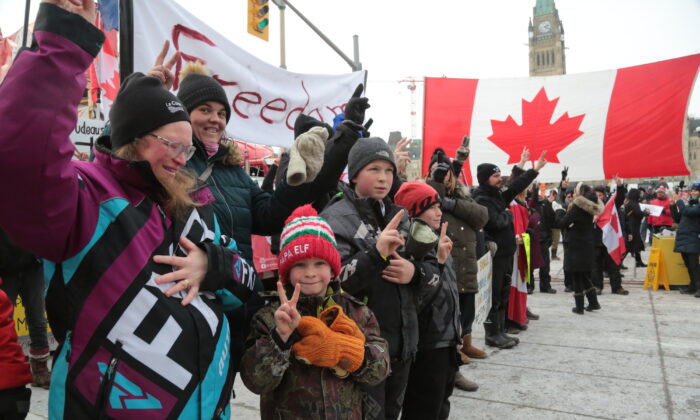 Ottawa Mayor Jim Watson’s office would not take a call from the Parliamentary Protective Service (PPS) during the truckers’ Freedom Convoy early this year, the office’s acting director told a parliamentary committee on Sept. 29.

Larry Brookson told members of Parliament and senators in a joint committee that he was concerned about the large number of vehicles that were gathering on Wellington Street near the precinct of Parliament Hill during the first week of the protest that called on the Liberal government to end mandatory COVID-19 vaccine mandates and restrictions.

“The call I requested to have with [Watson] was in the response of opening back up Wellington Street and escorting the trucks back up onto Wellington,” he said.

The PPS, which is responsible for security on Parliament Hill, didn’t have jurisdiction beyond its precinct, and Brookson said despite his concerns, the city and Ottawa police granted protesters permission to drive and park on Wellington Street, which faces Parliament but fell outside of the PPS governance. Brookson said “the streets would’ve been blocked” if he was in charge of the area.

“My concern, when [the convoy protest] started, was the amount of vehicles already established on Wellington Street, and that was the first weekend,” he said. “During the first weekend, there started to be some removal of vehicles that were leaving overnight. So my discussions led with … security partners to start establishing jersey barriers because what I didn’t want to see happen was a backfill of those vehicles that, on their own initiative, decided to leave.”

Brookson said his team, however, only received a notification from Watson’s office stating that the mayor was “not available.” He said he also reached out to the city manager, Steve Kanellakos, who gave Brookson a similar response.

The Epoch Times reached out to the city for comment but didn’t hear back by publication time.

Brookson also told the committee that the mayor’s office did not communicate with the protective service about a failed deal between the city and convoy organizers to bring the protest to a negotiated end during its height.

According to Dean French, who negotiated with leaders of the Freedom Convoy, convoy organizer Tamara Lich acknowledged the protest was “disturbing others,” saying that that was never the intent of the movement. Lich said in a Feb. 12 letter to Watson that the convoy will reposition their vehicles starting Feb. 13.

However, they weren’t given enough time to carry out that task, French said, as the Liberal government invoked the Emergencies Act less than 24 hours later on Feb. 14, giving the police sweeping additional powers to remove the demonstrators in escalated operations over the next few days.

“This was a black mark on Canadian history. History will show this was a total overreaction … and the inquiry is going to show that as well,” French told CBC’s Vassy Kapelo in an interview on Aug. 17.

Brookson told the committee that he supports the extension of the parliamentary precinct to include Wellington Street, a change that he said is currently under review.

The Special Joint Committee on the Declaration of Emergency is undertaking parliamentary hearings as part of a study on the federal government’s unprecedented invocation of the Emergencies Act in response to the three-week convoy protests. The Emergencies Act replaced the War Measures Act in 1988, which had been invoked three times: during the two World Wars and the 1970 FLQ crisis in Quebec.

Other witnesses who testified at the committee on Sept. 29 include Sergeant-at-arms Patrick McDonell, who is the corporate security officer for the House of Commons, and his Senate counterpart Julie Lacroix.

Parliament’s security actors testified that they did not receive any new powers under the state of emergency, and Brookson said he did not think that such powers would be necessary for the protective service to be able to govern a jurisdiction that includes Wellington Street.

Brookson previously testified in another House committee in June, saying that the PPS didn’t request the Act be invoked.

The Canadian Press contributed to this article.