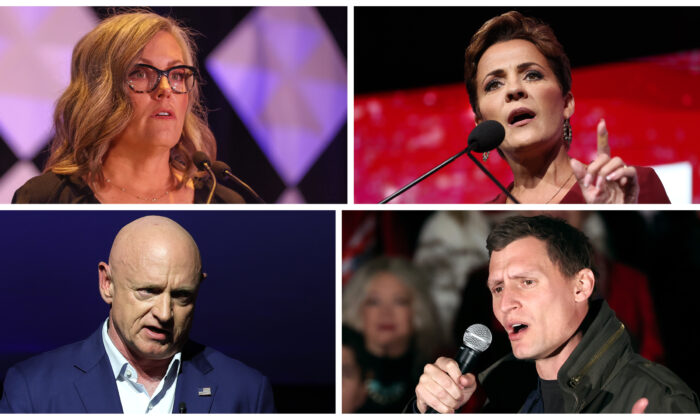 The Senate and gubernatorial races in Arizona still await conclusive results as hundreds of thousands of ballots await processing and tabulation. The process, which is notoriously slow, is made all the more frustrating by a lack of updates. Officials blame time-consuming ballot processing requirements.

“I think we’ll see the lion’s share here wrap up by early next week,” Bill Gates, chairman of the Maricopa County Board of Supervisors, said in a CNN interview on Nov. 10.

Maricopa County is by far the most populous county in the state and the one with most of the yet-to-be-counted ballots—more than 400,000.

By noon after Election Day, Arizona managed to count more than 1.8 million ballots, showing Democrat Sen. Mark Kelly ahead by about 5 percentage points of Republican Blake Masters, and Arizona Secretary of State Katie Hobbs about half a percent ahead of Republican Kari Lake in the gubernatorial race.

About seven hours later, another 100,000 votes were added to the count with little change to the results. At that point, the secretary of state’s office estimated that more than 600,000 ballots were still to be counted, including more than 300,000 early votes still waiting to be verified for signature match and other attributes.

There were no further updates over the following 18 hours. Then, less than 3,200 votes were added to the count around 1 p.m. on Nov. 10, all from Yavapai, Navajo, and Pima counties.

Officials have blamed the slow counting process on statutory requirements that mail-in ballots have their signatures matched to voter signatures on record and that they be opened and separated from their envelopes manually by two-person teams. This process has always caused delays in Arizona but has become more impactful in recent elections, in which more voters have dropped off their mail-in ballots in person on Election Day.

In Maricopa County, some 290,000 early ballots were dropped off on Election Day, which is about 70 percent more than in 2020, Gates said, noting that none of those have been counted yet.

Lake has argued that the uncounted mail-in ballots will skew her way.

“These people received them a month ago, but they didn’t trust—probably most of them—dropping them off at a drop box or in the U.S. Postal Service,” she told conservative commentator Steven Crowder. “So they filled them out, they went into the voting center on Election Day, and handed them in. They felt that was the safest way to ensure that their ballot truly got to where it needed to go.”

She believes that 60 to 80 percent of those votes are for Republicans.

“In 2020, we stood firm to protect our democracy[.] In 2021, we stood firm against the sham audits[.] In 2022, we will stand firm again until every ballot has been counted[.] So hang tight Arizona — and let’s let our local election officials do their jobs, without fear or interference,” she wrote in a Nov. 9 tweet, referring to Republican efforts to examine the 2020 election results for irregularities and fraud.

Lake has strongly supported those efforts.

GOP official Harmeet Dhillon said some updates are expected from smaller counties during the day and another from Maricopa in the evening.

“It only gets better for us going forward!” she wrote in a Nov. 10 tweet.

The lack of updates has frustrated some Republicans.

“You have every right to be upset with the fact that in 24 hours Maricopa County only released 2% more results,” GOP official Tyler Bowyer wrote in a tweet.

Update: The article has been updated with new information from Arizona and Maricopa County election authorities.