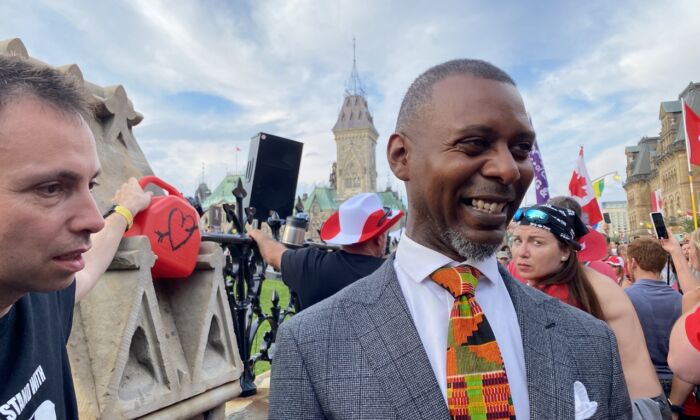 The federal government aims to “further subjugate society” by extending COVID-19 mandates, a criminal lawyer told a large crowd of protesters at Parliament Hill on July 1, following calls from top health officials for eligible Canadians to get booster shots.

Knia Singh, a criminal defence lawyer with Ma’at Legal Services in Toronto, made the remarks at a rally held in Ottawa to mark Canada Day. The rally was held after thousands of people marched through the downtown core of the national capital to protest federal vaccine mandates and call for freedom.

“Why we are here is because those who control the media, those who are in the high places of government, have decided that they want to further subjugate society,” Singh said. “I don’t want this to be true, but if you look at every single piece of evidence, what else could it be? Why would they do this, unless they want people to be put in their place, not speak up—because this is what’s happening.”

On June 30, federal Health Minister Jean-Yves Duclos and Chief Public Health Officer Dr. Theresa Tam said there will likely be a resurgence of Omicron variants like BA.4 and BA.5 in late summer and early fall, and called on those eligible to get their third shot.

Singh said many doctors who have presented evidence and arguments that contradict the conventional narrative or public health measures related to the pandemic are being censored, including University of Guelph professors Dr. Bonnie Mallard and Dr. Byram Bridle.

“These doctors have presented evidence that show that these mandates are not right—they are not humane, they are not helpful, they’re actually more destructive. Why hasn’t Dr. Tam ever told anybody?” he said.

He said the government has presented COVID-19 statistics in a way that leads people to believe the pandemic is a major threat, noting that masking mandates and lockdown measures deprive people of oxygen, fresh air, and sunlight.

“I’m not telling anybody here not to be vaccinated, but what I’m saying is, this is a human right, a human choice,” he added. “And when your body is now being given over to the state for them to dictate what you can do with it, this is the next phase of human slavery.”

“What’s happening to humans, all humans right now, is that you no longer have a choice in what you do.”

Singh raised the alarm about the impacts of government mandates on Canada’s legal system, which he said is increasingly discriminatory against the unvaccinated population.

The lawyer said he had previously challenged an order from the chief justice of the Ontario Superior Court that required all jurors from the court’s jury panel to be vaccinated, but he said he was “blocked in every way possible.”

It is a problem, he said, in that studies have shown that vaccinated and unvaccinated people have different perspectives, and that “every person who is facing trial has a right to select from the pool of eligible Canadians.”

“Once you exclude unvaccinated jurors, you’re excluding a segment of the Canadian population, and it is unconstitutional, it is illegal, and it actually affects the outcome of the trial,” Singh said.

As Singh spoke, the crowd at the rally could be heard cheering, and sometimes yelling “Shame!”

To get out of the “mess” created in the past two and half years of the pandemic, Singh said it is important for people to educate themselves about bylaws and their rights, and fight back against the mandates “intelligently.”

“We have to intelligently disobey. We can’t just disobey for the sake of making noise and drawing attention,” he said. “We have to disobey with knowledge behind our words and our actions. That is the only way we’re going to get out of this. We’re at a very pivotal point in human history.”

Everyone must come to realize the harms of the mandates, he said.

“It’s important that those loved ones that you care about who have bought into this, or have accepted this, or gone along with it, you need them to be on your side with this because they need to realize taking away human freedoms is not the acceptable answer,” he said.